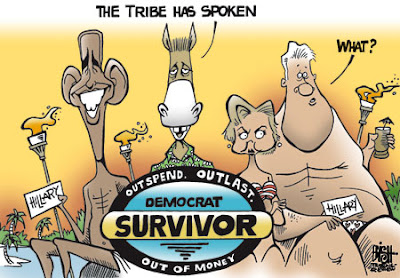 I'm sure every candidate who had visions of winning the White House in 2008 -- with the exception of Barack Obama and John McCain -- would like to see a do-over in the primary contests held so far. Remember Rudy Giuliani and his Florida strategy?

And I can't wait to see what happens when the Democratic Party attempts to prevent delegates from Michigan and Florida from casting ballots for Clinton or Obama because those states broke party rules by moving their primary elections up. And who's the genius who came up with the "superdelegate" plan?

There's gotta be a better way to settle on presidential nominees.

The plan getting the most support is regional primaries to be held on a rotating basis. Here's a look at how the plan would work from The Associated Press:

The presidential primary reform plan backed by the Carter-Baker election commission and the National Association of Secretaries of State would establish four regions for primaries and caucuses.

— Iowa and New Hampshire would retain their positions as the start of the voting cycle.

— The regional primaries would follow at one-month intervals in March, April, May and June.

— A lottery would be held to determine the order for the regions to vote, with the first region moving to the end of the sequence and the others moving forward in subsequent presidential elections.

Friggin hilarious “Day in the Life of a Superdelegate” video
http://www.youtube.com/watch?v=qSYOqXV-TeM