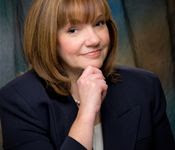 Terri McCormick, author of the book "What Sex is a Republican?" and a Republican candidate in Wisconsin's 8th Congressional District, makes the following observations about the bribes used by Democratic leadership to get 60 votes for Obamacare in the U.S. Senate:

In the rush to pass the so-called "healthcare reform bill," U.S. Senator Ben Nelson (D-NE) stomped his feet and held his breath until he extracted his presents from Senate Majority Leader Harry Reid. One such gift exempts Nebraska from paying the $45 million increase in Medicaid imbursement costs. Nelson was the 60th Democrat to get his stocking stuffed.

Smart parents know not to give in to spoiled children trying these shenanigans. If we gave kids everything they demanded, our family budget would be as busted as last year's toy under the couch. You know, the one with batteries that are only made in China.

Each of us will soon pay for the Senate's extravagant spending. In Senator Nelson's case, his Nebraska voters will be exempted from the substantial cost increases generated by new Medicare patients mandated by this plan. Wisconsin taxpayers will foot the bill not only for the additional costs for Wisconsinites, but for Nebraskans, too.

Senator Reid is like the parents that give their screaming kids everything they ask for.

Read her full statement at the link below: