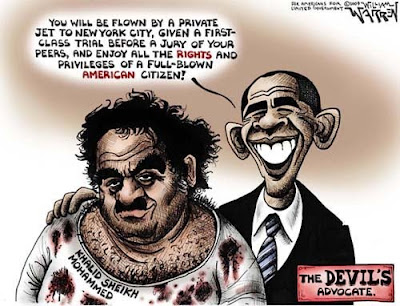 It doesn't appear that Barack Obama's Muslim-heritage or his dazzling personality have won the U.S. many friends among the radical Islamic community.

Let's review what Obama has done in the past year to make life easier for Islamic radicals whose stated mission in life is to kill American citizens:

Obama has released dozens of terrorists from Guantanamo and plans to close the military prison entirely.

He intends to bring some of the world's most dangerous terrorists, captured on the battlefield, to United States soil for trial in civilian courtrooms.

He's traveled the world to apologize for U.S. foreign policy and has canceled major weapons system. The groveling hasn't worked, either.

What's it going to take or how many Americans have to die before Barack Obama and his far-left cronies in the White House begin to take terrorism seriously?

The Nigerian man charged with the Christmas Day bombing attempt aboard Northwest Flight 253, Umar Farouk Abdulmutallab, reportedly spent time in Yemen after graduating from a London university in 2008. According to ABC News, Abdulmutallab has told authorities that, while in Yemen, Al Qaeda operatives crafted the explosive device which was sewn into Abdulmutallab's underwear.

"Yesterday just highlights the fact that sending this many people back — or any people back — to Yemen right now is a really bad idea," said Rep. Pete Hoekstra (R-Mich.), the ranking Republican on the House Intelligence Committee. "It's just dumb… If you made a list of what the three dumbest countries would be to send people back to, Yemen would be on all the lists."

"I think it's a major mistake," Rep. Peter King (R-N.Y.) said about prisoner releases to Yemen. "I don't think Guantanamo should be closed, but if we're going to close it I don't believe we should be sending people to Yemen where prisoners have managed to escape in the past… Obviously, if [Abdulmutallab] did get training and direction from Yemen, it just adds to what is already a dangerous situation."