Obama vs. The Panty Bomber 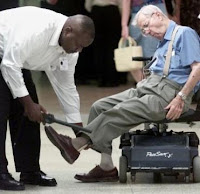 Dave Cribbin shines a light on the Obama Administration's inability to protect Americans from Islamic terrorists for fear of offending the Muslim world or the far left that elected him.

From his new column at GetLiberty.org:

Even a hungover, nearsighted, cross-eyed, Spanish Fighting Bull could have seen this guy coming a mile away. Umar the Islamic Jihadist Terrorist, whose actions should have raised more red flags than even the Russian Army owns, tried to blow up a commercial flight to Detroit with a Panty Bomb.

The myriad of red flags, any one of which would have been enough to have prevented you or me from ever boarding our flight, didn't even slow him down as he flew from Nigeria to Amsterdam and then on to Detroit.

Why is it that Umar Farouk Abdulmutallab, a last minute, cash paying customer on an international flight, whose only carry on luggage was his Panty Bomb, was not subject to the same level of scrutiny that I received when I flew from Tampa to Newark NJ to attend my uncle's funeral? This, even though his father had called the US Consulate and warned them that his son was dangerous; a phone call that landed Umar on a terror watch list.

I, on the other hand checked an overnight bag, wasn't on the terrorist watch list, wore only a pair of gym shorts, a t-shirt and flip flops, (Where I might ask was I going to hide a bomb in this outfit?) and carried only my wallet and a cell phone.
Still it was deemed necessary that I undergo enhanced security measures. The reason? I booked the trip late. So what were Umar's excuses? Oh yeah, that's right, he wanted to blow up the plane!

The Obama Administration's Home Land Security Chief, Janet Napolitano, appearing on a Sunday morning news show looked tough in her leather jacket, but acted like a real wimp, suggesting that the government's watch list of over 500,000 names, one of which is Umar Farouk Abdulmutallab, was just too large to search in an attempt to prevent a terrorist bent on killing all the other passengers on the plane from boarding.

Where do they keep this watch list, and why is it so hard to search? Is it written in crayon, perhaps in poor penmanship on index cards and stored in the bottom of a draw of a desk in a little used basement office of an annex at homeland security? I typed the word terrorist into the Google search engine as I wrote this piece, and it came back with about 37 million entries. How long did it take to perform this search? It took 0.12 seconds. It's not that the list is too long, it's that no one is watching the Watch List. So why do they call it a watch list if they don't watch who is on it?

Our politically correct system of airline screening is a Giant Joke, inconveniencing everyone, yet protecting no one. How can I tell? It's easy. I can't carry sunscreen in my suitcase when I go to Miami, but an Islamic Jihadist from Nigeria on the government's terrorist watch list, a person who's actions should have set off all kinds of alarms, can carry a bomb onto a plane and all they want to know is if he wants the chicken or the vegetarian dinner.

Read the full column, "The Panty Bomber… Place Your Knickers on the Conveyor and Step away from the Machine," here.

Did we forget that these morons in charge can't provide security for the Whitehouse let alone detecting a known terrorist coming into the U.S.? Heaven forbid if we offend anyone's feelings or profile an innocent Muslim. Yet, incompetent Janet tells us the system is working. Those who voted them in got a change. The clowns are running the circus