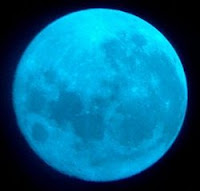 Mike Cronin of The Pittsburgh Tribune-Review tells you everything you've always wanted to know about a blue boon:

Tonight's blue moon might not be the auspicious start to a new decade that people hope it is.

The month's second full moon could be the devil taunting humanity -- at least that's what Christians believed during the Middle Ages, said Gregory McNamee, who writes for Encyclopedia Britannica.

Medieval Christians used the moon to identify the correct date for Easter, said McNamee, who's based in Tucson.

Each month was supposed to have just one full moon, so the Christians called a second one "belew" -- Middle English for "false" or "betrayer," McNamee said.

"It was like Satan was trying to trick you so you can't celebrate the real date of Christ's Resurrection," he said.

So The Lord of the Bottomless Pit has something in common with the song that begins "Bom-ma-bom, a-bom-bom-a-bom." The Marcels' "Blue Moon" hit No. 1 in 1961.

The moon becomes full a second time this month at 12:13 p.m., Pittsburgh time, today, said Kim Long, author of "The Moon Book" and "The Moon Calendar."