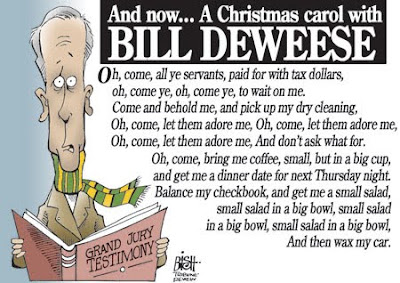 Another sickening example of how the House of Lords operates in Harrisburg.

Former aides' grand jury testimony about state Rep. Bill DeWeese's "diva" behavior has nothing to do with his six felony charges of using staff for campaigns. But it does paint a sickening portrait of the haughty mentality that permeates Harrisburg and feeds corruption in state government.

Staffers balanced DeWeese's checkbook, paid his bills, got cash from ATMs (which he supposedly didn't know how to use), picked up his dry cleaning, and arranged his dinners with lobbyists, plus female company for him at table -- and even bought condoms for him, according to the testimony.

For a man so out of touch with everyday life, could running afoul of that pesky law about separating legislative and campaign work been much of a stretch?

Whether "DivaWeese" represents an aberration or just a difference in degree when it comes to Harrisburg business as usual, such exploitation of staff by a "public servant" to fulfill personal whims is detestable.