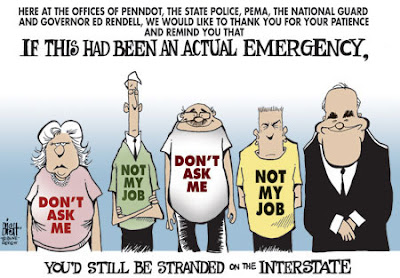 Fascinating article in the Wisconsin State Journal about how state officials did not learn a thing from the Interstate 78 fiasco in Pennsylvania, where more than 1,000 motorists were stranded for up to 24 hours during a storm.

Gov. Ed Rendell, who was watching a basketball game while men, women and children were freezing without food or water on a heavily traveled stretch of highway, made a big deal about a study of the fiasco and how the February 2007 incident would never happen again.

It happened this month in Wisconsin under very similar circumstances.

Wisconsin officials read the Pennsylvania report on the Interstate 78 fiasco, but still made many of the same mistakes.

In both cases, police, transportation and emergency management officials failed to perform the most basic duties they were entrusted with.

"Wisconsin officials knew about a report detailing the state of Pennsylvania's botched response to a severe winter storm there last year. But they still made the same mistakes during the Feb. 6 blizzard here," according to the newspaper.

Reading the story in the Wisconsin State Journal was deja vu all over again:

In the Pennsylvania case, thousands of motorists were stranded for hours and even overnight on Interstate 78 after heavy snow and sleet caused semitrailers to jackknife and block the Interstate. Similar problems here on Feb. 6 left 2,000 vehicles stuck overnight on a roughly 24-mile stretch of Interstate 39-90 between Madison and Janesville.

• In both states, information about the crisis on the ground didn't flow to top highway patrol officials, who failed to grasp that they were facing a large-scale crisis. Both Collins and his Pennsylvania counterpart weren't told about the major blockages until hours after they should have been.

• The command centers run by each state's emergency management agency failed to coordinate an effective response between state and local agencies.

• Both states failed to quickly shut down their Interstates and use electronic signs to communicate with drivers effectively, allowing many more motorists to become part of the traffic jam without adequate food and supplies.

• Neither Doyle nor Rendell learned of the crisis until after 7 p.m., preventing either governor from quickly mobilizing the National Guard to provide help to motorists.

"There was a fundamental failure to communicate among the various governmental entities as well as state agencies," Rendell spokesman Chuck Ardo said of the Pennsylvania response.

This isn't an indictment of a Democrat or Republican governor, although for the record, both Rendell and Doyle are Democrats.

Government, by its very nature, is incompetent. If you rely on government to protect you during a time of crisis, you're in for a rude awakening.