Guest Column: I hate to admit it but the French were right 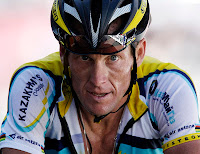 For more than 10 years the snooty French had doubts about world famous American cyclist Lance Armstrong.  Because he won their Tour de France seven times they were suspicious and thought "How can zis be? He is only an American. We are zee French and we invented le bicycle, le Alps and le champagne zat we shake and squirt at zee winn-eers."

We all know that Lance Armstrong survived cancer, began the "LIVESTRONG" foundation and sold yellow bracelets to raise money for cancer research.  Armstrong tooted his own bicycle horn as the world’s best cyclists, was a huge celebrity, made many millions in endorsement deals, hung out with movie stars and was engaged to rock star Sheryl Crow. But sadly for Armstrong, the U.S. Anti-Doping Agency (USADA) finally deflated the fake champion’s tires.

For years Armstrong brutishly fought those who accused him of using performance enhancing drugs and blood-doping but in the summer of 2012 he finally gave up the fight but still called the investigation "an unconstitutional witch hunt,” and refused to recognize "USADA's authority to sanction him."  That followed quickly with the USADA banning Armstrong from professional cycling for “his numerous anti-doping rule violations, including his involvement in trafficking and administering doping products to others." Armstrong lost all his Tour de France victories, his 2000 Olympics bronze medal, his super-secret celebrity passwords and invitations to red carpet events.

Le French had always been his strongest critics and when his banishment was decreed, French media showed a sense of vindication and resentment. Jean-Rene Bernaudeau of France’s bicycle racing team told Reuters, "The rotten years of cycling have been identified and Lance Armstrong is out. We are working as hard as we did then and we have better results. French cycling has regained its standing."

The Christian Science Monitor quoted a French newspaper editorial that read: "Saint Armstrong, pierced with arrows, has finally succumbed. This illustrates anew that this sport is poisoned by doping."

Greg LeMond, America’s first real Tour de France winner said about Armstrong "If Lance is clean, it is the greatest comeback in the history of sport. If he isn’t, it would be the greatest fraud"

Fast forward now to the present January 17th and 18th, 2013, and Armstrong spilled most of his guts to the Oprah in a two part confession where he said used performance-enhancing drugs. This is an amazing reversal after years of his statements, interviews and court battles in which he again and again denied doping and defended his reputation like a knight in shining armor slaying the accusing trolls.

I’m not sure exactly what the Oprah interview was other than an attempt to save some shred of his career. Was this the beginning for the Armstrong World Sympathy Tour? Probably. But remember this, Armstrong didn’t pull off his blood-doping scam alone. He had dozens of people involved and he had threatened many of them and bullied them not to talk.

What I predict will follow is an avalanche of law suits headed Mr. Armstrong’s way from those who should have won those seven Tour de France victories, his sponsors, the people he defamed and anyone else in the world who feels hurt or misled. The London Sunday Times already filed a lawsuit to recover $500,000 it paid Armstrong to settle a previous libel lawsuit. The ripple effect of a fraud this big could be endless. Kinda like Al Gore’s fraud selling his fossil fuel hating anti-global warming unwatchable cable TV “Current” channel to oil rich anti-human rights Al Jazeera.

And of course it always comes back to "what about the children?" who looked up to Lance Armstrong the All-American cheater, bogus role-model and all around skunk.  I’ve never been a big believer in role-model athletes. Charles Barkley, former NBA player said many years ago in a Nike TV commercial "I'm not a role model... Just because I dunk a basketball doesn’t mean I should raise your kids."  That’s right and he spoke the truth. Real role models should be parents, family and friends. Kids need to be surrounded by good, honest hard working people. Parents need to be vigilant and keep the bad guys away and not let them influence their kids. It is so simple, the non-politically correct formula for a stable grounded child is: a two parent home that has established reasonable boundaries enforced with consequences and love.

In the end it may be that Armstrong’s only real victory was against his testicular cancer which had spread to his lungs and brain. He was given a 40 percent chance of survival at the time and was never expected to compete again at anything athletically. Miraculously he overcame cancer and fraudulently he became world famous.

As a tenth generation American with some tiny bit of French genetics, I feel bad for the French to have had to endure the Lance Armstrong fraud for so many years. I must admit the French were right.

John C. Bieber is an author and columnist based in Boyertown, Pa.. He can be contacted on Facebook at www.facebook.com/john.c.bieber