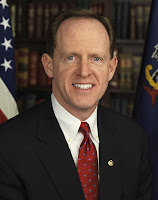 U.S. Sen. Pat Toomey (R-Pa.) announced Wednesday he will reintroduce legislation with Sen. David Vitter (R-La.) to establish term limits for members of Congress. Their legislation would create a constitutional amendment that limits Senators and Congressmen to three terms in the U.S. House of Representatives and two terms in the U.S. Senate.

Toomey is a rare breed of politician, who imposed term limits on himself while serving in the House. He stepped down after three terms representing Pennsylvania's 15th Congressional District.

From a press release issued by Toomey's office:

"Congress should not be a body of career politicians who have forgotten why they were sent to Washington in the first place," Sen. Toomey said. "We are here to do the people’s work, to solve the problems we face, and to leave to our children a stronger, safer, more prosperous nation. I kept my promise to serve just three terms in the House of Representatives. I am pleased to cosponsor a Constitutional amendment to enact term limits for both the U.S. House of Representatives and the U.S. Senate, and I look forward to working with my colleagues on both sides of the aisle to see this through."

"Not allowing individuals to remain in office for an eternity is an important step we need to take to restore confidence in Congress," said Sen. Vitter. "Call it Potomac Fever, or whatever you'd like, but the longer some folks are in Washington, the more taxpayer money they want to spend."