We Don't Need No Stinkin' Congress! 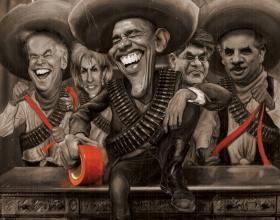 Since Supreme Leader Barack Obama has essentially neutered Congress and is ruling by decree, why don't we just send the 435 House members and 100 Senators home and save some money?

The Weekly Standard recently took a comprehensive look at how Obama routinely bypasses Congress and imposes "laws" through regulatory actions by his various cabinet departments and czars. And don't look for help from the courts. Lawsuits move slowly and the damage Obama has done to the U.S. economy, in many cases, cannot be repaired.

And that analysis is limited to just the administration's "major rules" — rules costing more than $100 million annually — for which the agencies calculated costs and benefits. It neglects 41 other "major rules" for which benefits and costs had not been calculated, and is only "a fraction of the 317 significant regulations, and over 3,500 total regulations," promulgated by the administration, according to Susan Dudley, director of George Washington University's Regulatory Studies Center and former OIRA administrator under President George W. Bush.