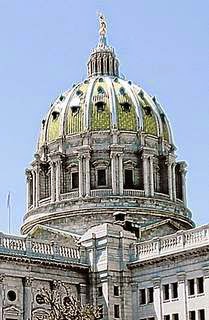 With Republicans holding commanding majorities in both chambers of the Pennsylvania Legislature, the real power-brokers in Harrisburg over the next two years will be GOP legislative leaders and not newly-elected Democratic Gov. Tom Wolf. With that in mind, conservatives are mounting a challenge to Senate Majority Leader Dominic Pileggi, who is blamed for scuttling much of Gov. Tom Corbett's first-term agenda and leading to Corbett's defeat on Election Day. At least two state Senators -- Scott Wagner of York County and Donald White of Armstrong County -- have  publicly called for replacement of Pileggi, who represents parts of Delaware and Chester counties. And now Sen. Jake Corman of Centre County, the current Senate Appropriations Committee chairman, has announced he will challenge Pileggi for the top leadership post.

The conservative American Future Fund Political Action issued the following statement on the pending leadership fight within the GOP caucus:


"This past Tuesday, while Republicans across the nation were celebrating landmark victories, Pennsylvania Republicans were facing the first defeat of an incumbent Governor in the Commonwealth's history," said Nick Ryan, Chairman of American Future Fund Action. "One of the main causes of the defeat of Governor Corbett was the inaction, ineptitude, and impotence of the Republican leadership in the Pennsylvania State Senate."

"For four years, Governor Corbett was unable to pass virtually any legislation that would have moved Pennsylvania in the right direction. The cause was simple, members of the Republican State Senate cared more about union bosses in Philadelphia than their constituents or the good of the Commonwealth as a whole. The blame for all of these problems lies at the feet of Majority Leader Dominic Pileggi. Pileggi's Philadelphia Boss-Style politics has no place in the leadership of the Republican Party should we hope to govern based on principles rather than our campaign coffers," concluded Ryan.

With Republicans controlling 30 of the 50 seats in the Pennsylvania Senate, a majority vote of 16 within the GOP Caucus is needed to win the post of Majority Leader, which Pileggi has held for the past eight years.