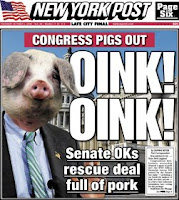 They just can't help themselves.

Stuffed inside the $700 billion financial bailout approved by the Democratic-controlled Senate is $1.7 billion worth of pork spending, according to the New York Post.

"Congressional deal-brookers yesterday slopped a mess of pork into the $700 billion financial rescue bill passed by the Senate last night - including a tax break for makers of kids' wooden arrows - in a bid to lure reluctant lawmakers into voting for the package," the newspaper says.

From an article by Daphne Retter:

"This is how Washington works," said Keith Ashdown of Taxpayers for Common Sense, a Washington research group. "A big pot of pork is their recipe for final passage."

The special provisions include tax breaks for:

Another measure inserted into the bill appears to be a bald-faced bid aimed at winning the support of Rep. Don Young (R-Alaska), who voted against the original version when it went down in flames in the House on Monday.

That provision - a $223 million package of tax benefits for fishermen and others whose livelihoods suffered as a result of the 1989 Exxon Valdez oil spill - has been the subject of fervent lobbying by Alaska's congressional delegation.

Read the full story and an editorial criticizing Congressional pork in today's edition of the newspaper.

THE POLITICIANS WHO USED THIS BILL TO SATISFY THEIR OWN AGENDA, SHOULD BE SENT HOME, TODAY!!!! How many students college education could have been paid for with that money??? How many families could keep their homew=s with the Rum money??? Wool research??? How much more do we need to know about wool?? It is WOOL !!! Racing tracks, C'mon, are you kiddin me? Whatt they need, new beer stands, some black-top, or maybe more hotdog vendors, and Samoa, don't even get me started, do they even pay taxes to us??? And if so, how much do they pay?? What are they afraid of losing their huts over there? Television productions, I think we have enough TV. Wall Street thanks you, and once again, MAin Stree picks up the tab....

Jack Brestel, how come nobody in news media brings up the pork, and list names of who received my money. Chris Dodd, Franks, who were over the banking system, should be traveling with the circus, but could not pocket enought cash. Rum,race tracks,movie production, and all others. They will have a hard time getting any tax dollars from me.