If it quacks like a lame duck, it must be Ed Rendell 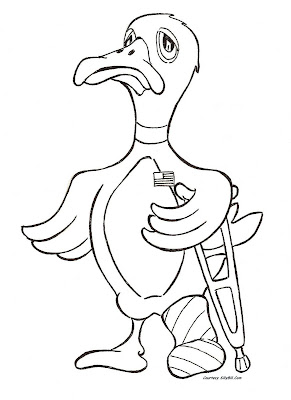 July 9, 2007, will go down as a significant date in Pennsylvania political history. It's the day 25,000 state workers were furloughed after a nine-day budget impasse. It's the day Gov. Ed Rendell and the Legislature reached agreement on a $27.4 billion budget for the 2007-08 fiscal year, bringing state spending to new record highs.

It's also the day Gov. Rendell officially became a lame duck. Behind the smiles and back-slapping at a Monday night press conference announcing the agreement, you could almost see the white flag of surrender coming from the Rendell camp.

Just six months into his second four-year term, Gov. Rendell gave up nearly everything he promised to fight for in the new budget. His ambitious second-term agenda, announced in February, expired on July 9, 2007. Rendell went up a united GOP Senate and got his clock cleaned.

Rendell proposed seven new or expanded taxes as part of his 2007-08 spending plan. He got none of them. That's 0 for 7. Rendell said he would never give up his energy independence initiative or his electricity tax. Rendell said he was prepared to drag the budget fight out all summer if necessary to get his way. The best Rendell could do was a promise from the GOP Senate that it would consider his $850 million energy plan in the fall during a special session.

You remember the last special session the Legislature held? That was last fall when the Legislature was supposed to solve the property tax problem. The best it could do was Act 1, which was rejected by voters in 99 percent of the state's school districts. Expect a similar fate for Rendell's energy plan.

Rendell promised to hold up the budget until the Legislature came up with a dedicated source of funding for mass transit. Rendell's grand scheme was to lease the Pennsylvania Turnpike to a private company. That's not happening. The best Rendell could get was a toll hike on the Turnpike and a plan to make Interstate 80 a toll road by 2010. The I-80 toll plan will end up in court and may not happen because federal dollars were used to build the road. That could force Rendell to come back with a Plan B.

Rendell promised to hold the General Fund budget and the Legislature hostage unless he got his universal health plan approved. That didn't happen either. No tax on businesses who don't provide health coverage to workers. Rendell huffed and puffed about a smoking ban. The best he could do is a watered down version.

Rendell also wanted to raise the state's debt ceiling by $500 million but Republicans stood their ground on that one, too.

Senate Republicans promised to hold the line on spending at the rate of inflation, and almost kept that promise. (The budget increase is somewhere between 3.5 percent and 4 percent depending on what you include in the budget numbers. Rendell original budget proposal would have increased state spending by 7 percent.)

Senate Republicans told Rendell they wouldn't consider his peripheral agenda (alternative energy, transportation funding, health care) until the budget was signed and they stuck to their word. Without the furloughs (and the threat of shutting casinos) hanging over them, Senate Republicans can take an even tougher stand against the Spendell Administration down the road.

Rendell's miscalcualted on the furloughs. He thought he could blackmail the GOP into rubber-stamping his initiatives by telling state workers to stay home. When it became clear over the weekend and into Monday that Pennsylvanians were blaming Rendell for the shutdown of state services, the governor and his Democratic pawns in the House quickly folded.

After four years of getting his way all the time, Rendell met his match this year. Senate GOP leaders stood up to Rendell, something their predecessors were unwilling to do. (That's why Chip Brightbill and Bob Jubelirer were voted out of office last year). The GOP has a solid majority in the Senate and could pick up a couple more seats from vulnerable Democrats (Mike O'Pake in Berks County and Andy Dinniman in Chester County) next year.

House Republicans also came out of the budget battle looking good. They attempted to pass a bill Sunday to prevent the worker furloughs, but Democrats wouldn't bring it up for a vote. (Democrats didn't have the guts to vote no.) Republicans tried again Monday, but Democrats didn't show up on the House floor. Many were hiding under their desks, some were playing golf, according to news report.

This was Rendell's best chance to get his big government, liberal agenda through the Legislature. Rendell has control of the House with 102 Democrats and GOP turncoat Dennis O'Brien as his puppet Speaker. Expect Democratic defections now that Rendell has waived the white flag.

House Republicans can go into the 2008 elections saying they stood up to Rendell on taxes and borrowing. The GOP's prospects of taking back the House in 2008 got a lot better — thanks to Ed Rendell.

“Society in every state is a blessing, but government, even in its best state, is but a necessary evil; in its worst state an intolerable one; for when we suffer or are exposed to the same miseries by a government, which we might expect in a country without government, our calamity is heightened by reflecting that we furnish the means by which we suffer.” — Thomas Paine