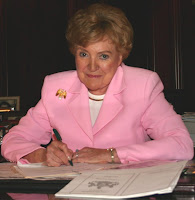 Sen. Hillary Rodham Clinton will be among the political notables attending a memorial service Friday in honor of the late Pennsylvania Lt. Gov. Catherine Baker Knoll.

Gov. Ed Rendell's office confirmed that Clinton will speak at the ceremony, scheduled for noon Friday in the Capitol Rotunda.

More from a press release issued by the governor's office:

The service will include tributes from public officials and performances by the Keystone Christian Education Association All-State Choir, which is made up of 150 students from across the state. An Honor Guard including representatives of the Pennsylvania State Police, State Capitol Police and members of the Pennsylvania National Guard will serve as pallbearers. Bishop Kevin C. Rhoades, Bishop of Harrisburg, will participate.

For reasons of security and crowd control, the Capitol Rotunda will temporarily close to the public from 10 a.m. to 2 p.m. on Friday. During this period, visitors to the Capitol should use the East Wing entrance on Commonwealth Avenue. The Rotunda will reopen at 2 p.m. to allow the public to pay final respects to the Lt. Governor, who will lie in repose until 2 p.m. on Saturday.

The service also will be carried live by the Pennsylvania Cable Network, which is distributed on more than 150 cable systems serving more than 3.3 million homes. A complete listing of PCN affiliates and network channel designations is available at www.pcntv.com