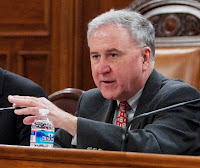 The announcement is scheduled for 11 a.m. at the Pennsylvania State Lodge of the Fraternal Order of Police, located at 2949 North Front Street, Harrisburg, PA.

Rafferty is serving his third four-year term in the state Senate representing the 44th District, which stretches across Montgomery, Chester and Berks counties.

If he wins the race for attorney general next year, a special election will be held to complete the rest of Rafferty's state Senate term, which runs to the end of 2014.

Rafferty serves as chairman of the Senate Transportation Committee and is a member of Appropriations, Banking and Insurance, Consumer Protection and Professional Licensure, and Judiciary committees.

Before running for the Senate in 2002, Rafferty was an attorney in private practice, focusing on education, real estate, zoning and business and estates law.

Before that, he served as Deputy Attorney General for Pennsylvania from 1988 to 1991, where he he was responsible for the Criminal Law Division and Grand Jury Investigations.

Since the attorney general's office became an elected position in 1980, no Democrat has won the office.

The current attorney general is Republican Linda Kelly, who was nominated by Gov. Tom Corbett to complete the final two years of his term after Corbett was elected governor in 2010. Honoring a "gentleman's agreement" in the state Senate, which had to confirm Kelly's appointment, she agreed not to seek a full term as attorney general.