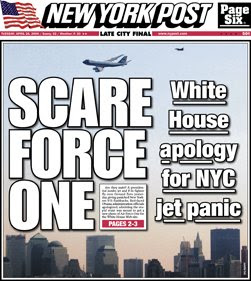 While The New York Times, the official propaganda arm of the Obama Administration, downplays the story, New York's tabloids appropriately put the Air Force One flyover story on Page 1 of today's editions.

Imagine the coverage if George W. Bush had pulled a bonehead move like this.

Check out the New York Daily News coverage at the newspaper's Web site.

Check out the YouTube video of panicked civilians below.