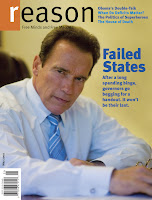 Veronique de Rugy, writing in the May issue of Reason magazine, notes that the federal deficit is three times higher than it was under Ronald Reagan, who is still blamed by Democrats for raising the national debt to historic levels.

Now, three decades later, Democrats have changed their minds about the dangers of deficit spending. In February 2009, the nonpartisan Congressional Budget Office estimated that the deficit will reach $1.2 trillion this year — roughly 8.3 percent of GDP. That giant increase is attributable mainly to Washington's September 2008 bank bailout and the federal takeover of mortgage lenders Fannie Mae and Freddie Mac.

And that figure assumes that the 2009 budget issued last year by the Bush administration will stay at its proposed level, which it surely won't. The calculation does not include the cost of the Iraq and Afghanistan wars, and it doesn't include the chunk of the new $787 billion stimulus bill that will be spent in 2009. Add all these numbers together, and the deficit swells to $2 trillion, or roughly 13.5 percent of GDP (see Figure 1).

This is by far the highest share of the economy that deficits have taken up since World War II. It is well over twice the record set by Ronald Reagan in the 1980s. Yet we don't see Democrats denouncing the deficit explosion on the network news, like they did two decades ago.

A senior research fellow at the Mercatus Center at George Mason University, de Rugy believes there will be severe consequences to the Democrats' unchecked spending:

Deficits certainly do matter if you care about shrinking the size of the state. Budget gaps are a kind of Ponzi scheme. Any year the federal government spends more money than it collects in tax revenue, we have a budget deficit. That means the citizens through their taxes authorize politicians to spend a certain amount yet the government spends more.

The plan is to pay this additional spending back with future taxes, just as Bernard Madoff figured he'd pay off early investors with dollars from pigeons he conned down the road. As with any Ponzi scheme, there will inevitably come a time when the con is exposed, along with all the participants' losses.

John Maynard Keynes, the 20th century's preeminent defender of deficit spending, famously quipped, "In the long run, we are all dead." Keynes did not give much guidance, though, on how we would pay for the funeral.

Read the full column at Reasononline