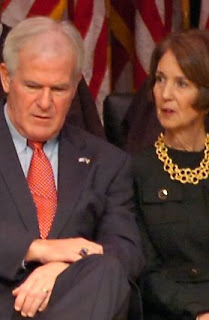 As if Montgomery County Commissioner Jim Matthews needed any more bad publicity comes the news that his wife, Karen, is now a registered Democrat.

Reporter Margaret Gibbons broke the story in The Times-Herald, which covers the county seat of Norristown in Montgomery County, where Matthews is chairman of the county board of commissioners.

Matthews has turned his back on the Republican Party, making a deal with Democratic Commissioner Joe Hoeffel to share power on the three-member commissioners' board, which also includes Republican Bruce L. Castor Jr.

Karen Matthews (pictured here with her hubby) told Gibbons that she switched her party registration from Republican to Democrat so she can vote in the April 22 Democratic Party primary.

Gibbons also reports that Lita Cohen, a former Republican state representative, has switched her party registration so she can vote in the Democratic Party. But Cohen is backing Hillary Clinton.

Karen Matthews said she does not want to see the Clintons back in the White House, so she will be voting against Hillary Clinton on April 22.

She also suggested in the same article that former President Bill Clinton should be required to register as a sex offender for his sexual tryst with a young White House intern.

"It is scary that he could return to the White House and have all that time on his hands," Matthews said, adding that she intends to cast her ballot for Illinois U.S. Sen. Barack Obama. "There should be some type of Megan's Law that requires the public be notified if he returns."

Matthews told Gibbons she plans to change her party affiliation back to Republican immediately after the primary.

Alex Charyna at PAWaterCooler.com isn't so sure Karen Matthews will return to the GOP fold. I'm guessing his reservations are based on the damage Jim Matthews has done to the Republican Party in Montgomery County over the past year.

Bill Shaw at Writemarsh says Mrs. Matthews might as well stay a registered Democrat ... and Jim Matthews should join her.

"I ain't buying it," Shaw writes. "I heard through the grapevine that Lita Cohen had supported John Kerry in the last presidential election, and King James (Matthews) is one foot on a banana peel from becoming a democrat already, so why would either of these RINO's switch back anyway?"

She is not the only one. I've done the same in order to cancel out one other vote for Clinton. Been Republican or Independent all my life , casting votes in elections for almost 60 years. But this primary I will be voting Democrat for Obama!

We do not need another Clinton in the White House.

The caption for the photo: "Jim, how could you be such a shit?"

the other angle i heard on Republicans switching to Democrat for the primary is that they will then vote for Clinton, because they fell she will be an easier victory for McCain. this will only get more interesting as the Dems continue to bash each other