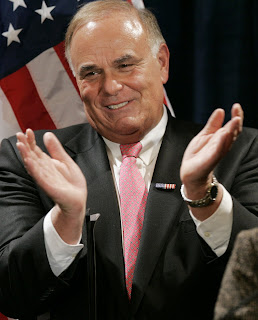 Gov. Ed Rendell sent the letter below to every member of the Pennsylvania Legislature today. Read the entire letter if you like, but I can summarize it for you in a couple of lines: Even though Pennsylvania is headed for tough economic times and Pennsylvanians are struggling to survive financially, the state should spend more tax dollars on a variety of projects to benefit the governor's well-to-do friends and business associates.

Rendell appears to be teetering on delusional. Pennsylvania residents are worried about high gas prices, the cost of feeding their families and keeping their jobs, but the governor wants to take the state deeper into debt so his fat-cat campaign contributors can continue to benefit at the expense of taxpayers. Did you hear about the $1 billion in no-bid contracts Rendell awarded to politically-connected firms in the past five years? You paid for that.

It's time to put a stop to Rendell's out-of-control spending, a $7 billion increase since he took office in 2003. Rendell now wants $28 billion in spending for the fiscal year starting July 1. How about a decrease in state spending for once? Pennsylvania taxpayers have to tighten their belts. Why not state government?

And where's the tax relief Rendell and lawmakers promised in 2004 when they approved casino gambling in Pennsylvania?

All members of the state House and half the Senate face re-election in 2008. The issues are clear. 1) Eliminate property taxes. 2) Curb state spending. 3) No hidden hidden increases in taxes and state fees. If your lawmaker won't do that for you, it's time to replace him or her.

The Honorable General Assembly of Pennsylvania

In the last two months Pennsylvania has been jarred by significantly negative news.

In January of this year the Commonwealth hit a historic record of more than 5,811,000 jobs, but in February the Commonwealth's economy reversed course and 8,000 jobs were eliminated. While our state remains on track to have a substantial budget surplus by the end of this current fiscal year, it appears that we are now faced with the harsh reality that the economic downturn has officially arrived in Pennsylvania.

Events over the last two months have also forced us to face another harsh reality – important parts of Pennsylvania's infrastructure are beginning to crumble and we need to repair them as quickly as we can.

On February 8th PennDOT discovered that the decking for the southbound lanes of the Birmingham Bridge in Pittsburgh had partially fallen off their supports and dropped eight inches. The entire bridge had to be closed while temporary supports were added to fortify the bridge and keep it operable pending full repair of the supports. The total bill for the repairs may be as high as $7 million.

Just five weeks later, on March 17th, engineers discovered that one of the columns supporting an elevated section of Interstate 95 in Philadelphia had a dangerous crack that required a three mile stretch of the nation’s largest superhighway to be closed for three days while temporary supports were put in place until a total rebuild can commence. PennDOT estimates that the cost of properly repairing all of the I-95 bridges in the Philadelphia region will be a stunning $3 billion.

These are just two examples of a much larger problem. PennDOT estimates that the total repair bill for all of the state’s deficient bridges is nearly $11 billion.

Despite the gravity of these problems, there is an answer, one which I outlined to you during my budget address – implementation of the Pennsylvania economic stimulus and infrastructure renewal program I proposed to you on February 5th.

I am writing now to ask you to enact immediately the following parts of that program. These measures will stimulate our economy at a time when stimulus is most needed by creating jobs and generating new business for Pennsylvania manufacturers and suppliers. At the same time, these measures will enable us to quicken the pace of repairing critical components of our state infrastructure:

1. Authorizing the appropriations needed to implement the Rebuild Pennsylvania program

6. Providing new funding for the Businesses in our Sites program

7. Raising the debt ceiling of the Redevelopment Assistance Capital Program

8. Enacting the Protect Our Progress Rebate

If we are serious about helping our citizens deal with the effects of the current economic downturn and protecting the safety of Pennsylvanians by working immediately to repair our infrastructure, we must work together in a bipartisan effort to enact these programs as soon as possible.

The people of Pennsylvania cannot wait until we conclude the 2008-09 budget negotiations for us to consider this agenda. This would delay the provision of economic relief our citizens need now, and defer infrastructure repairs that could endanger their safety.

I urged action on the Protecting our Progress package of bills in my budget address to the chambers on February 5th. I am writing today to urge you to act with wisdom and haste to protect our economy from further deterioration and with great hope that we can grow this economy and increase prosperity for the families of the Commonwealth.

In the last two months Pennsylvania has been jarred by significantly negative news such as me being hell bent on gettting Hillary Clinton elected, or my racist comments about our population in regards to Obama.

Basically just keep spending more, and as long as you keep my Philadelphia thugs... I mean associates happy, I will be there for you.