'If Barack becomes President, will Jeremiah Wright be swearing him in on the Bible?' 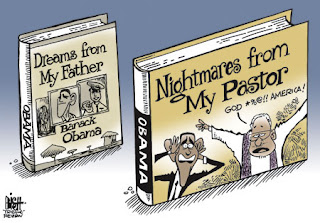 Here's a sampling from Hawkins:

"What's the difference between Al Sharpton and Barack Obama? They have the same positions on the issues and they both embrace radical racists like Jeremiah Wright. So, the honest answer is that the only real difference is that Obama and Sharpton don't use the same rhetoric. Scratch away the pretty, flowing rhetoric that Barack uses and you'll find the same ugly, racist policies underneath."