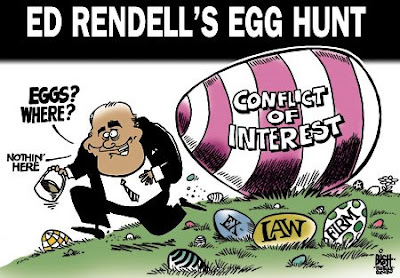 If things don't work out for Hillary Clinton this November and Ed Rendell doesn't get to go to Washington as a member of the Clinton cabinet, I have another suggestion for Gov. Rendell's next job.

Ed Rendell has a future with Halliburton, the multinational corporation that has been criticized for receiving billions in no-bid contracts from the U.S. government.

You see, the governor, affectionately known as "Ed Spendell," has awarded $1 billion in no-bid contracts since taking office just five short years ago.

That revelation comes courtesy of The Pittsburgh Tribune-Review, which meticulously added up all the contracts Rendell has awarded to friends, business associates, former law partners and political contributors.

"What is beyond the pale is the level at which the Rendell administration has engaged in this," state Rep. Doug Reichley, R-Lehigh, told reporters Brad Bumstead and Jim Ritchie.

State lawmakers say Rendell's heavy use of no-bid contracts, often in secret and some to his former law firm, must be investigated, according to the newspaper.