Man to stand trial for stabbing over Clinton/Obama 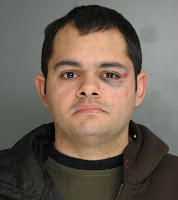 The Times-Herald in Norristown is reporting that a Montgomery County man accused of ending a political argument by stabbing his brother-in-law with a kitchen knife will stand trial in county court.

Jose Antonio Ortiz, 28, of the 100 block of Collegeville waived his preliminary hearing Thursday on charges of aggravated assault, simple assault, recklessly endangering another and possession of an instrument of crime.

The stabbing occurred on Feb. 21 when Ortiz and Sean Shurelds, 42, of Lower Salford, became embroiled in a heated dispute over Democratic presidential candidates Hillary Clinton and Barack Obama, according to reporter Margaret Gibbons.

Assistant District Attorney John N. Gradel said his office is taking the case "very seriously," Gibbons writes. "Most of us settle these differences in the voting booth. I don't believe that pulling a knife and stabbing another person is the way to handle it."

The full story will be in Friday's edition of The Times-Herald and The Mercury.