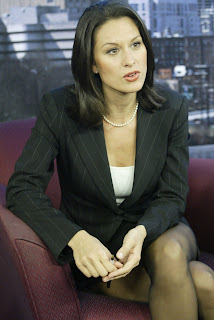 Don't mess with the Latina Bombshell.

The legal action stems from Lane's arrest in December for allegedly striking a NYC policewoman.

Lane was fired from her $700,000-a-year job as co-anchor of the local newscast on the CBS affiliate because of the bad publicity surrounding the incident.

Lane's claim charges that her civil rights were violated, citing false arrest, unlawful imprisonment, conspiracy to deprive her of constitutional rights, libel, slander and defamation, according to Gross.

The felony charges of assaulting a police officer were dropped in February.

A judge agreed to dismiss the rest of the charges if Lane stays out of trouble.

Lane has a civil lawsuit pending against CBS 3, claiming she was fired without cause.

Read the full story at the Daily News Web site.

a gal has gotta get her income somehow. LOL, that'll teach NYC for letting her off the hook