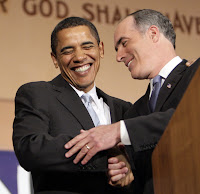 Three weeks after stating he would not pick sides in the Barack Obama/Hillary Clinton contest in order to maintain party unity, Pennsylvania U.S. Sen. Bob Casey has endorsed Barack Obama.

What prompted Silent Bob to speak on the presidential race?

Casey told a Pittsburgh rally this morning that "I believe in my heart that there is one person who's uniquely qualified to lead us in that new direction and that is Barack Obama."

Wasn't Obama that person three weeks ago? Who knows what goes on in the mind of Silent Bob Casey, Pennsylvania's junior senator?

"I really believe that in a time of danger around the world and in division here at home, Barack Obama can lead us, he can heal us, he can help rebuild America," Casey said.

Casey, who like Obama was elected to the Senate in 2006, is a strange political animal. He disagrees with Obama on a number of key issues, including abortion and gun control, but somehow can see past those differences to support the junior senator from Illinois.

The New Republic thinks Casey's endorsement is a big deal for Obama.

Obama trails Clinton in Pennsylvania polls by double digits, but he's just starting to campaign in the state with a six-day bus trip kicking off in Pittsburgh.

Also, the latest Gallup Poll has Obama leading Clinton nationally by 50 percent to 42 percent. You can see the full poll results at http://gallup.com

The Pennsylvania primary, in which 158 delegates are at stake, is on April 22.

Your post is inccorect. Obama was elected to the Senate in 2004. Casey was elected in 2006.