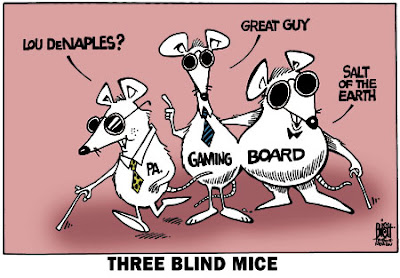 Four years after he rushed a casino slots bill through the Legislature, Gov. Ed Rendell is reluctantly agreeing to fix some of the flaws in the gambling legislation.

The 2004 bill that opened the way for 51,000 slot machines in Pennsylvania was another of those middle-of-the-night pieces of legislation the Pennsylvania Legislature has become famous for.

There's nothing like allegations that the mob has infiltrated a Pennsylvania casino to get Rendell's attention.

Thanks to pressure by Republican lawmakers, Rendell is finally coming around on much-needed fixes to the original bill.

Also check out this week's column by Brad Bumstead of The Pittsburgh Tribune-Review.

GOP Reps. Doug Reichley of Lehigh/Berks, Mike Vereb of Montgomery, Curt Schroder of Chester and others have introduced House Resolution 652, which would set up a panel and give it subpoena power to compel testimony from gaming board members, state police and others, according to the newspaper.

Republicans want to go much further in closing some of the loopholes in the law.

The lawmakers called on the General Assembly to close the loopholes that continue to exist in the law in an effort to keep organized crime out of gaming and make both structural and procedural reforms to Pennsylvania’s Gaming Control Board, according to a press release.

A major component of the legislative package involves creating a Division of Gaming Enforcement under the Attorney General, where it would have the complete authority of a law enforcement agency in carrying out investigations, the release states.

Other key components of the legislation include decreasing the number of board members from seven to five and limiting their outside employment. The legislation would also amend the casino ownership licensing process and procedures that the board follows by requiring public hearings on the qualifications of applicants and tightening the license and permit disqualification criteria.

"Such inadequacies in our gaming law prevented a thorough background check before a license was awarded to a Mount Airy casino owner who was later charged with lying about his connections to organized crime figures," Piccola said. "If we do not correct this statute, we are hanging out a sign telling organized crime: Welcome, open for business, Pennsylvania."

"The disclosures of the past few months have robbed our citizens of the perception that the licensing process was conducted with honesty and integrity," Reichley said. "Let me underscore that this is a sound beginning on what should be a bi-partisan effort to amend the current law. There will certainly be some aspects of this legislation with which some members in the House or Senate disagree, but we need to begin the process of improving the current law immediately."