Good riddance Dick Willey, but how about the rest of the PHEAA board? 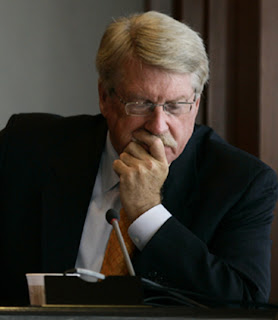 Penny for your thoughts, Dick Willey. Hmmm ... Maybe that trip to Hersheypark wasn't the best idea.

Times were good under Willey's tenure. The champagne flowed at ritzy resorts, where foot rubs and facials were the norm, in between expensive meals, $150 cigars and rounds of golf. Who would have thought that a trip to Hersheypark would lead to Willey's ignominious exit from his $289,000-a-year job?

Willey treated PHEAA employees and their families to a day of fun in "the sweetest place on Earth" to the tune of $108,000. I speak from experience that a trip to Hersheypark can leave your wallet flat. A slice of pizza and bottle of water will set you back $6, which charges $46 for admission.

I guess Willey didn't think anyone would notice … until that busybody Jack Wagner came along. Wagner, the state auditor general, released a scathing report Thursday documenting excessive spending by the state's student-loan agency.

The audit comes after months of troubling revelations about trips to swanky resorts by PHEAA executives and board members. Nearly $900,000 was spent on the junkets. And the agency spent another $400,000 to hire lawyers to fight release of the expense reports when news agencies filed lawsuits seeking access to spending records.

And those bonuses. Wagner said PHEEA handed out $2.5 million in bonuses to employees during the previous fiscal year, which ended June 30, 2007. Willey himself pocketed $181,000 in bonus money last month.

Willey was planning to retire at the end of the year, but the Hersheypark incident was the final straw. He's leaving town next week.

Willey deserves the public humiliation he got, but let's not forget his co-conspirators. The 20-member PHEAA Board of Directors, consisting of current Pennsylvania lawmakers and other government appointees, is also guilty of incompetence in failing to adequately supervise PHEAA spending.

From the Associated Press:

Sen. Sean Logan, D-Allegheny, the board's vice chairman, said it was "totally unacceptable" that the board was not told in advance about the April 22 outing at Hersheypark, about a month after PHEAA executives had pledged to rein in unnecessary spending.

"This is another example of Dick Willey thinking he's bigger than the board," Logan said.

Most of the board members have been "supervising" PHEAA for 20 years or more. If they didn't know about the wasteful spending, they're too stupid to serve in an oversight capacity. If they knew and went along, they don't deserve to hold public office.

All 20 board members should be removed and the 16 elected legislators voted out by their constituents. Many of them will be on the ballot in 2008.

Wagner told the AP that PHEAA should eliminate the bonus program altogether.

"They are state employees, not money managers on Wall Street," he said.

And none other than Gov. Ed Rendell chimed in.

Rendell said the report showed clearly there have been "abuses," including the Hersheypark event, according to the AP.

"We've got to clean that agency up," Rendell said.

This from a many who has presided over $6 billion in new state spending over the past five years.

There's a lot more cleaning up to do in Pennsylvania than just PHEAA, Gov. Spendell.