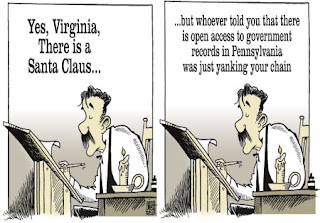 Will Pennsylvania get a good open-records law on the books before the end of the year or will residents get a lump of coal from their legislators once again?

First we thought the best plan was in the Senate, where Senate Bill 1 was introduced. But then the House came up with a comprehensive overhaul that looked good. Then House members gutted the bill and added all sorts of amendments. So we're back to the Senate version that passed 48-1 last week.

Now, the House has come up with a revised open-records bill. It appears that the House version might be the best one out there. Will it pass the full House?

What will it look like after a House-Senate conference committee gets through with it?

This editorial from today's edition of The Mercury brings us up to speed on the endless quest to allow the people access to the people's business.

And doesn't this cartoon by the great Randy Bish of the Pittsburgh Post-Gazette say it all?