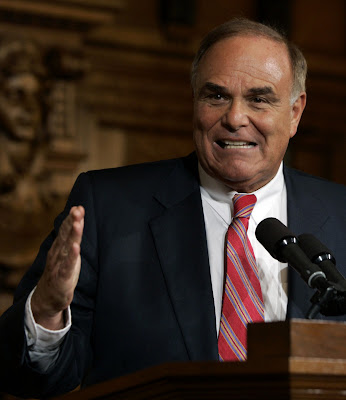 Somebody should put SWAT on notice. Gov. Ed Rendell is planning to take hostages again.

Rendell is threatening to withhold state aid to help doctors pay for malpractice insurance unless the Legislature approve the governor's plan to provide government-subsidized health care for the state's 800,000 uninsured residents.

Rendell's "Cover All Pennsylvanians" proposal has been languishing in the Legislature since February because lawmakers refuse to consider Rendell's 3-percent payroll tax on employers who do not provide health insurance to fund health coverage for the uninsured.

The governor now wants the Legislature to use part of the projected $500 million surplus in the state's medical malpractice fund (MCare) to pay for the uninsured (in addition to a 10-cents-a-pack tax on cigarettes and new taxes on cigars and smokeless tobacco.)

This is not the first time Rendell has threatened to hold hostages to get his way. He did it earlier this year with state workers. And we all know how well that worked out.

It just five months ago when Rendell and the Legislature could not agree on a $27 billion General Fund budget for the 2007-08 fiscal year, which began July 1. Rendell's bargaining chip was 24,000 "non-essential" state workers. Rendell went ahead with the furlough, but when the Legislature wouldn't budge, he brought the workers back the next day (and ended up paying them for the extra vacation day).

As I said back in July, when you take hostages, you have to be willing to follow through with your threat to harm them. Rendell blinked and lost the fight over the budget. Taking the state's doctors as hostage is an even dumber move. Unlike state workers, doctors have more resources at their disposal. They can do a lot of harm to politicians.

Rendell and the lockstep Democrats in the House have overreached throughout 2007. Pennsylvania residents want lower taxes, not more taxes and expanded government control of health care, transportation and energy.

In a story by John Micek in today's Allentown Morning-Call, state Rep. Mike Sturla, a Democrat from Lancaster County, is quoted as saying he is willing to shake down Pennsylvania taxpayers even more to get the governor’s initiatives passed.

"I don't care if we stand people on their heads and shake pennies from their pockets," Sturla said. "All I want to do is make sure Pennsylvanians have access to health care in a reasonable, rational manner."

What a pleasant site. Rendell and Sturla holding a Pennsylvania taxpayer upside down and shaking him until every penny falls out of his pocket.

Ask Sturla's constituents in Lancaster County if they'd like to pay more in taxes to people in Philadelphia and Pittsburgh can get health insurance. I think not.

Sturla may have talked his way out of a job when he faces re-election next year.

And what happens when the MCare fund is drained down to zero? Rendell is notorious for spending every dime that comes his way.

What fund will he raid next year to replenish the MCare fund? The basic economic concept that Rendell has operated under is "Rob Peter to Pay Paul." Peter is tired of giving and Paul is in no mood to give anything back.