This is CNN, the Corrupt News Network 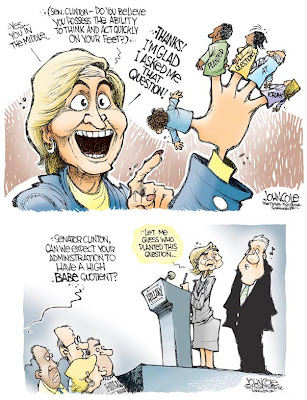 I'm not in the habit of reading the Los Angeles Times and I never heard of Tim Rutten before. (I'm guessing he writes about the media for the newspaper). But I came across an interesting column posted at the Times' Web site about the blatant partisanship displayed by CNN, the left-leaning cable news outlet.

CNN, which Rutten has dubbed the Corrupt News Network, has been showing favoritism to Democrats for years, but the recent GOP presidential debate exposed the network for what it is: a propaganda wing of the Democratic Party.

In case you've been under a rock or you get your "news" only from the left-leaning mainstream media, CNN pretended to randomly pick questioners for the debate, but it turns out many of the "citizens" who posed questions were connected to Democratic Party candidate campaigns or were known left-wing bloggers and activists.

CNN got caught with its pants down.

"This most recent debacle masquerading as a presidential debate raises serious questions about whether CNN is ethically or professionally suitable to play the political role the Democratic and Republican parties recently have conceded it," Rutten writes.

"CNN has failed in its responsibilities to the political process and it's time for the leaders of both the Republican and Democratic parties to take the network out of our electoral affairs." Rutten writes.

Former CBS newsman Bernard Goldberg, now a best-selling author and media critic, has made a career of exposing liberal hypocrisy in the news media.

The cartoons are by John Cole. Check out more of his work here.