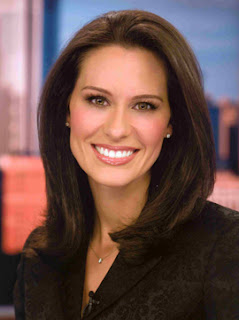 I'm so disappointed in you. What were you thinking, girl? Who do you think you are? Paris Hilton? Lindsey Lohan? Britney Spears?

Alycia Lane, the hottest TV news anchorwoman in Philadelphia, is making news again instead of reporting it.

When we last talked about the stunning, 35-year-old brunette, she made national headlines in May when she sent bikini photos of herself to a former colleague. Unfortunately, the wife of Lane's former co-worker intercepted the e-mailed photos and raised a ruckus.

Alycia made headlines across the country for the indiscretion, which she laughed off as a prank among old pals. Who hasn't received pin-up photos from former co-workers? Well, me for one.

Our Alycia has graduated from "marriage-wrecker" to possible felon. This one is going to be harder to explain away.

Alycia Lane allegedly punched a female New York City cop, according to the Philadelphia Daily News, the city's tabloid daily that lives for these kind of stories.

Here's part of what the newspaper is reporting today:

Lane, 35, her current honey, Q102 morning host Chris Booker, and another couple were in a cab behind a slow-moving unmarked cop car, the New York Post reported. One of the males jumped out and headed to the police vehicle, screaming, "I don't care if you're a cop, drive faster!" the newspaper said.

The officers got out and identified themselves to Lane and company, and Lane began to take photos, according to the paper. The female cop asked her to step back and that's when Lane lost it, according to the Post.

A station source said Lane's iPhone was confiscated by cops as evidence.

Lane was charged with one count of assault with intent to cause physical injury to an officer, Nieves said.

Lane was released on her own recognizance by 5 p.m. yesterday. No bail was set.

Alycia Lane is news co-anchor for the 6 pm and 11 pm newscasts on KYW-TV Channel 3, the CBS affeliate in Philadelphia. How long she keeps her job is anyone's question.

Viewers don't mind eye candy when it comes to getting their local news, and they've been following Lane's busy love life with glee. But punching a cop? That's another story.

This is local news, Alycia, not CourtTV. Are you auditioning for the next edition of "Anchorwomen Gone Wild"?

Lane, through her attorney, maintains she never hit anyone. She has pleaded not guilty. A hearing was scheduled for April 3.

I can't wait to see how Channel 3 plays the Lane story. Do they ignore it and look like fools? Will the other TV stations in Philly run with it? The big story on Action News is ... the arrest of Alycia Lane. Stay tuned.