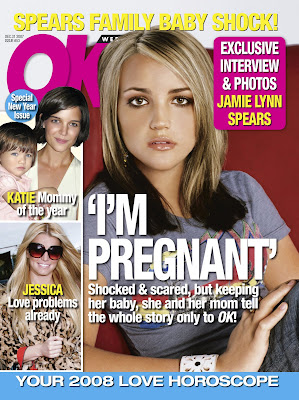 I don't watch "Zoey 101" on Nickelodeon. Then again, I'm not a 12-year-old girl, which I'm told is the target audience of the show. (For the record, I am a big fan of "SpongeBob SquarePants")

I have a few thoughts on the news that Jamie Lynn Spears, the star of "Zoey 101" and the younger sister of professional train wreck Britney Spears.

The 16-year-old TV starlet told OK magazine she was "shocked" to find herself with child.

It's a shame that no one in Jamie Lynn's entourage ever talked to her about birth control. I won't even say anything about her "parents." From everything I've read, they're a couple of sponges who live off their children. I doubt they would make the time between facials and trips to Rodeo Drive to talk to their girls about birth control.

But there's got to be a manager and a publicist and personal assistant out there. These people may soon be out of jobs because I'm sure Nick is not planning a one-hour special called "Zoey Gets Knocked-Up."

Nick isn't going to renew a show about junior high school kid who gets pregnant. And what kind of future will a 16-year-old unwed mother have in Hollywood? Her target audience is pre-teens and I like to think that most parents don't want their pre-teens buying merchandise or watching a show about Spears.

There's an interesting column by AP writer Beth J. Harpaz, "How Do You Break The News About 'Zoey' to a 10-year-old?"

Even the stodgy Philadelphia Inquirer weighs in today on the Spears pregnancy.

Let's look on the bright side. Jaime Lynn Spears is a "D" list star in the pre-teen universe. Imagine the scandal had "Hannah Montana" gotten pregnant. Teen girls all over the country would have been jumping off buildings.

You know, maybe someone should have spoken to Jamie-Lynn's boyfriend about BC too. But it's the old "double standard" that it's always the "girl's fault." I'm not in any way condoning any of this, I think it's terrible but the boyfriend is 50% responsible for this too. Unless he is just that ignorant himself. Ever hear of using a condom? Most of the outrage and negative remarks have been aimed at Jamie-Lynn and her parents, in particular Lynne Spears and yes, rightfully so - maybe they are not the greatest parents in the world themselves. But, this boyfriend should take some of the heat too. It's as much his fault as it is Jamie's. Just my opinion. Thanks.

Sadly, this is all too indicative of how our children are pushed to be adults too early. Sex is shoved at them constantly (by her older sister, no less) and neither the boy or the girl are taught responsiblity any longer.

The media makes too big of a deal out of this because of her sisters notoriety.

Most ridiculous was asking presidential candidates to weigh in on the subject.

Until we go back to teaching responsibility to our children and regaining at least some of the old fashioned morality so many scoff at, teen pregnacy will continue at an alarming rate.

Lew, I think I know what you mean. However, I would say that the sexual revolution has no relation to "growing up". As a matter of fact, I think the perputual adolescence of our society (some well into their 30's and beyond) is the real reason society is so screwed up. Everything is about me me me, pleasure and good times. Look at how many grown people can't wait to leave their workplaces for happy hour....let's keep the frat parties rolling, throw in a little viagra and we are good to go.