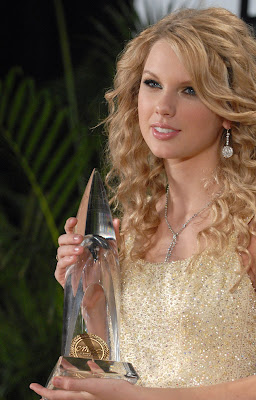 Who says you have to come from Nashville to become a country music star?

One of the biggest names in country music today is Taylor Swift, a native of Wyomissing, a suburb of Reading, Pa. (That's about 50 miles from Philadelphia).

Swift turns 18 today. Happy Birthday. Her meteoric rise has taken her from small clubs in Berks County to arenas. She's poised to be the next country music superstar. And she's only 18! (She makes Carrie Underwood look like a grandmother).

Swift writes her own songs and has already had three smash singles from her latest self-titled album.

And as you can see, her looks won't be getting the way of her career. Here she is holding the CMA Horizon award at the 41st Annual Country Music Association Awards in November.

The sky is the limit for this talented singer-songwriter. (She wrote or co-wrote every song on her double platinum debut album). And she's even released a Christmas album, "Taylor Swift - Sounds of the Season."

I'm proud to have a fellow Berks Countian make it big.

Read more about Swift at her Web site, www.taylorswift.com