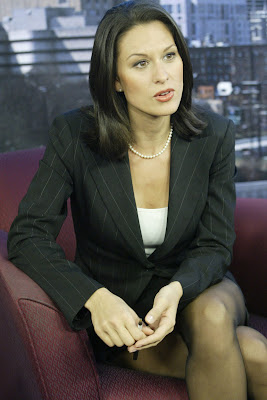 For the second day in a row, the lead story in the Philadelphia Daily News is the misadventures of Alycia Lane, the TV news anchor-babe charged with punching a New York City policewoman over the weekend.

This is the kind of story that tabloid newspapers die for. The question is how long can the Daily News splash Lane's attractive face on its front page?

The latest news about our little Alycia is that shortly after she was released by NYC police, she placed a call to Pennsylvania Gov. Ed Rendell. Read the full story at the newspaper's Web site.

Now this really hurts. Nobody has done more than I have over the past two years to keep Ed Rendell's name in the spotlight and I don't have the governor's cell phone number.

What does Alycia Lane have that I don't? (See photo for clues).

"Sources" confirmed to the newspaper that Layne, the knockout, 35-year-old news anchor, telephoned the governor around 5 p.m. Sunday, the same day she was arrested for allegedly going postal on a New York City policewoman.

Rendell's spokesman Chuck Ardo told the Daily News that Lane called the governor to "make sure he knew her side of the story because he is an opinion-maker and runs around in influential circles."

The revelation that Lane called Gov. Ed may be the final straw for Lane, who is on "vacation" from the CBS affiliate in Philadelphia, but will probably be going on an extended leave of absence to resolve her legal troubles. Don't bet on Lane returning to KYW TV 3.

Even if she manages to stay out of jail, she's embarrassed the station. I'm sure station managers are already going through audition tapes to find a younger (and better-behaved) anchor-babe to fill Lane's slot.

Don't be surprised if Lane lands one of those tabloid TV shows. They don't have problems hiring "bad girls." Other career moves for Lane? Is that celebrity boxing show still on the air?

Is this not a hate crime ? And if it is not, specifically why is it not ?

Why all the obvious silence on this ?

Phyrillas wrote: "Even if she manages to stay out of jail, she's embarrassed the station. I'm sure station managers are already pouring though audition tapes to find a younger (and better-behaved) anchor-babe to fill Lane's slot."

Did he mean "poring through?"

Thanks for catching the typos, Poncho. I must have been distracted by that photo. There's a job opening for proofreader if you're interested.