I gotta get me some PHEAA reusable glowing ice cubes 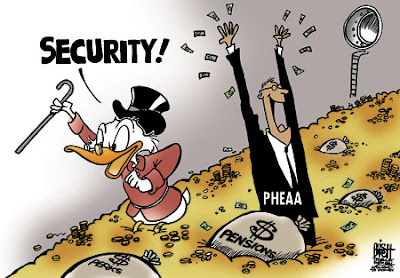 Just when you thought it couldn't get much worse for the state's embattled student-loan agency comes the revelation that PHEEA spent more than $2 million on trinkets with the agency's name on it.

The full story was published by the Harrisburg Patriot-News.

I've seen private companies put their logos on knick-knacks. But a state agency that is supposed to provide loans and grants to students to cover the rising cost of college doesn't need to promote itself on ash trays and dish towels.

Wouldn't you think that the $2.2 million could have been better spent?

Some of the more unusual items with the PHEAA logo, according to The Patriot-News, were 150 brass clocks at $22 each, $30 L.L. Bean jackets, 3,000 peppermint candies with its logo on the wrapper and $3,400 worth of gummy brains candy.

Keep in mind that 16 of the 20 members of the board of directors charged with overseeing PHEAA are elected members of the Pennsylvania Legislature, no stranger to wasteful spending.

The best quote about the latest PHEAA scandal came from Rep. John Shapiro, D-Montgomery County: "Gummy brains? The officials at PHEAA must have gummy brains if they were willing to waste scholarship money on these types of wasteful expenditures."

In case you haven't been keeping track of all the hijinks at PHEEA, the agency spent $900,000 on trips to resorts and spas for its employees, executives and board members. PHEAA then spent $400,000 in legal fees to prevent newspapers from gaining access to those spending records.

PHEAA approved more than $7.5 million in bonuses for its top executives. Some of those executives have decided to retire and will be collecting six-figure pensions.

And let's not forget that PHEAA spent $108,000 on employee passes to HersheyPark to give those stressed-out workers some time to unwind.

One of the clueless lawmakers who serves on the PHEAA board, state Sen. Sean Logan, D-Allegheny, who also happens to be vice chairman of the PHEAA board, defended the $2.2 million for promotional trinkets.

Logan told The Patriot-News that the student-loan agency's promotional giveaways helped advertise it to students and clients in a competitive marketplace.

And you need any more reasons why the cesspool in Harrisburg needs to be drained?