Christina Aguilera is not sexy 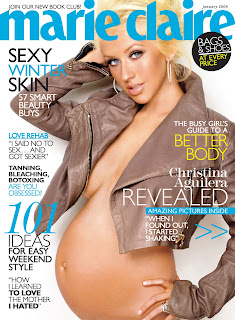 Maybe I'm turning into Andy Rooney in my old age, but I'm tired of celebrities and more specifically, I don't want to see any more pregnant celebrities posing nude for magazine covers.

It's nearly impossible to walk past a magazine rack these days without being confronted by a cover of a nude celebrity showing off her pregnancy.

It started with Demi Moore in Vanity Fair. It continued with Britney Spears in Harper's Bazaar. And a host of other minor celebrities bared all for the camera for a chance to grace the cover of a magazine.

And now we have Christina Aguilera in the January 2008 issue of Marie Clare. I don't want to see Christina's growing belly as I wait in the check-out line at my local supermarket.

What is it about pregnancy that prompts these women to take off their clothes? Would they pose nude if they weren't pregnant?

And what's so sexy about pregnant celebrities anyway?

There's a bunch of pregnant celebrities out there these days. Our obsession with celebrity has to stop. Who's next to bare all? Jennifer Lopez? Halle Berry?

And it's not just celebrities. I hear there's a growing trend in something called maternity photographers who specialize in nude photos of pregnant women. Business is booming.

Maybe it's the latest sign in the decline of morals in our society. Kids grow up exposed to all sorts of risque images on television. Reality shows are the worst. And it's not just television. Have you walked into a high school these days? Do you have any idea what the kids are wearing?

By the way, when is Andy Rooney retiring? Isn't he close to 100?

She's not nude. You may want to learn a little more about what nude is vs. not nude. I have a picture of my wife semi nude and I love it I think to make women feel good about their bodies when they feel big and uncomfortable is great. I'm sick of seeing only skinny girls every day all over the stores. I mean come on how often do we really see the celebrities posing "nude and pregnant". Sorry but this post is really just a bit over the top and does not make you look very open. Let people live a little free at least. By the way being "pregnant" does not prompt them to "take of their clothes" they do that quite freely anyway.

tony,
Come on... decline of morals in our society? my wife had photos of her pregnancy done some 25 yrs ago and to this day they are very special to use both. What could be more natural and beautiful than a woman carrying a new little life inside her? besides Tony, dont you think it's nice to see the human form being appreciated in a non-sexual manner.
D. from alaska

You are a bit right, pregnant women posing nude, hey come on. Maybe its because it is not associated with sex, i mean its not sexual but more natural. I just don't care.

Some people like the look of pregnant women, for me i don't. I think its natural and nice to have a new born but showing off in front of a camera no way.

I think they want to proove something, maybe they want to show that they can achieve at least one thing, yeah right!

And Dave are you gay?
more beautiful than a pregnant woman? Easy, A nice slim sporty healthy woman.

Tony,
You are a horse's ass. What are you, some sort of religious crackpot? Aguilera, in the photo you are discussing, is far from "nude." She IS beautiful and it seems to me that you are saying pregnant woman should cover up. Are they supposed to be ashamed of being pregnant or something? Grow up.

i have had too kids and i have never felt better, when i was pregnant i showed it off cause i felt beautiful. how dare you judge and try to get into a pregnant ladies mind. have you ever been pregnant?

of course we shouldn't obsess over celebrities, christina aguilera is not sexy, and trying to put on a face of seduction with your unborn child is a disgusting thought. but posing nude when your pregnant shows the beauty of motherhood, and all the sexual parts are covered, its the belly thats not, i've never been disgusted by a pregnant belly. its something that should be appreciated because its natural beauty as its finest. and i look forward to having pictures like that taken