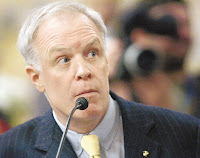 You know you're living on borrowed time when the state's biggest newspaper, the very liberal, the pro-Democratic Party Philadelphia Inquirer, is routinely running stories on its front page about Democratic corruption in Harrisburg.

Will Bill DeWeese survive the year as House Majority Leader? Will he be indicted before next April's primary election? Can the Democrats, mired in scandal, keep their 1-seat majority in the House beyond 2008?

The latest revelation about corruption and wasted tax dollars connected to the new Democratic majority in the state House ran Sunday under the headline, "Pa. taxes used for political polling"

Legislative leaders have paid out-of-state firms $466,000 so far in 2007 to conduct focus groups and public-opinion surveys, according to the newspaper.

The polling results are top secret. They are intended for the eyes and ears of DeWeese and other Legislative leaders.

Here's a prediction courtesy of the Phyrillas Poll: Even if DeWeese isn't indicted before April for his role in the bonus scandal, he will still lose in the Democratic primary. (This guy barely got re-elected in 2006 and it's been nothing but bad news for him and the Democrats ever since.)

If House Democrats had any sense, and that's a big if, they'd dump DeWeese as Majority Leader today before he not only loses the party's razor-thing majority, but sends the party of corruption into minority status for another 12 years.

History, which is DeWeese's forte, repeats. The Democratic Party took a decade to recover from DeWeese's last round of ethical lapses. He's sticking it again to his fellow Democrats.

Read the full story at the Inquirer's Web page, www.philly.com