Will Hillary Clinton be held accountable for the war? 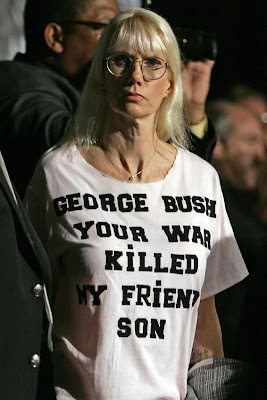 This photo moved by The Associated Press grabbed my attention. The woman, Sherry Wolfe of Lancaster, Pa., went to hear President Bush speak to the Lancaster Chamber of Commerce and Industry in Lancaster on Wednesday.

I wonder if Ms. Wolfe plans to attend any Hillary Clinton events.

Mrs. Clinton voted to authorize the United States to go to war in Iraq. Mrs. Clinton has voted to fund the war at least 10 times in the past five years.

Yet Mrs. Clinton is perceived as the anti-war candidate who will bring the troops home from Iraq.

I don't get it. Even Cindy Sheehan figured out that Hillary Clinton was jerking die-hard liberals around.

The Patriot-News reported that the crowed of 400 who heard the President speak were largely supportive.

The Lancaster New Era also reported that Bush was well received by the crowd. The newspaper wrote a separate article on a few hundred war protesters near the President's visit.

Mrs. Clinton is perceived as the anti-war candidate...

By whom?? Sheesh, you'll have to set up a better straw man than that ;-)

I'm very active in the anti-war movement in Lancaster -- and I know Sherry Wolfe. While I wouldn't presume to speak for her personally, I can safely say that I don't know of a single person who thinks Hillary is "the anti-war candidate."

In fact, there are a lot of us who WILL be out protesting if she shows up here.

Our real beef is with the Military Industrial Complex -- the one that Republican General Dwight Eisenhower warned us about.

I comment for no other reason than this: is a person who dots a capital "I" the sort of person you want supporting your campaign?? ;-)

God forbid the voters are crazy enough to elect Hillary in the first place, if she does bring the troops home to appease her fellow bleeding hearts and something catastrophic happens as a result, wonder if she'll take personal responsibility for the casualties that come about as an eventual result of her decision.

I'm Sherry Wolfe ,and Hillary Clinton is certainly NOT an antiwar candidate. I wouldn't hesitate to tell her that myself.
As for the dotted capital letter "I " in the word "killed ",it was 2:00 a.m. when I made the t-shirt. I ran out of the iron-on print I intended to use . Being very tired, I forgot to trim the edges off the large letter. But I doubt C student Bush noticed the mistake , seeing as reading is hardly his forte'...