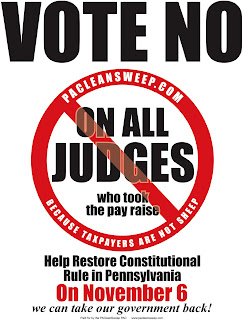 One of my favorite citizen activists is Bill McIntyre of Camp Hill. He doesn't have a Web site, doesn't hold press conferences on the Capitol steps. But he sends out well-written letters to elected officials and the media.

Here's McIntyre's latest missive, in which he urges voters to vote "No" to retain the state's 66 judges up for retention on Nov. 6 to send a signal to all elected Pennsylvania officials that taxpayers are mad as hell and are not going to take it any more."

In two weeks, Tuesday, November 6th is Election Day. Of the 365 days in the year, we have only two of them to change the irresponsible way we’re being governed in Harrisburg. Let's make the most of our 2 days that'll last the remaining 363! As the saying goes – "Vote early and often."

We've a major mess here in Harrisburg. I, among others, have for too long ignored what was happening in our handsome capitol building on a hill overlooking the beautiful Susquehanna River. While many of us were asleep; many others were awake filling their pockets with our hard earned tax dollars that flow to the capitol to be allocated the way government sees fit to do so.

The problem has been the majority in our government put first things first; their personal wellbeing before the wellbeing of those who elected them to serve the public. Public service has become self service to many in Harrisburg. Want examples? Read on. Remember Watergate? We've got one too.

We could well place "gate" after any of the following, in no particular order, areas of concern. How about Bonusgate; or Reformgate? How about Turnpikegate; or PHEAAgate? You get the idea. How about teacher strikes; open records; oversized pension payouts; ethics; nepotism; SEPTA & PAT; property tax; pension funding crisis; health care; indictments; tolling I-80 by the Turnpike Commission;

Act 44 passed last July was the worst piece of legislation since Act 44 of July 2005 granting everyone in the executive, judicial and legislative branches their ill-gotten pay raise. Due to the dubious maneuvering of the Supreme Court; the judicial branch retained their ill-gotten raise. This one Act 44 will cost us untold millions of dollars in interest, if approved by the federal government to lease I-80. What a failure that was. I'm beginning to believe the majority in our present government can’t get anything right.

With all the problems here at home; some of our esteemed leaders were fiddling while Harrisburg burns; in Taiwan. That's about as far away from Harrisburg as one could get, Taiwan. They billed it as a "trade mission." Yet, the most gigantic trade of all happened here when they traded billions in cash that leasing the Turnpike would provide and drawing interest; trading it to pay millions in interest on borrowed money. And they have our best interest at heart? What a joke! Now that's funny!!! Or is it?

What about Election Day, you say. Sometimes we have to sacrifice something good for something much better. It appears the only way we can get the attention of those who govern us is to defeat someone, or something at the polls. The 5% of our judges who are running for retention are probably good judges; but I will be voting NO for retention. Many of our public officials have proven to me they’re not worthy of their office.

It appears the only way we'll ever get change is to make change at the price of many public positions; and keep making changes until we get what's really needed – A Constitutional Convention. We must once again restore honesty and dignity in our government.