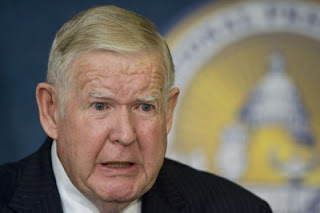 You've heard of a trial balloon, where politicians float an idea to see where the public stands on it. File this directly under lead balloon, as in it will sink before the day is out.

The Associated Press is reporting that three senior House Democrats, including John Murtha of Pennsylvania, are pushing for a tax surcharge on American workers to pay for the Iraq War.

Never mind that American taxpayers are already paying for the war, Democrats want you to pay more.

This would be on top of the higher taxes that Democrats are pushing to fund socialized health care. (Democrats want low-income Americans to pay higher cigarette taxes to support health care programs). And if Hillary Clinton is elected president next year and Democrats increase their majority in Congress, just sign over your entire paycheck to Uncle Sam.

The latest tax hike plan, unveiled by Reps. David Obey, D-Wis., John Murtha, D-Pa., and Jim McGovern, D-Mass., would require low- and middle-income taxpayers to add 2 percent to their tax bill. Wealthier people would add a 12 to 15 percent surcharge, according to the AP.

This is the same Democratically controlled Congress that approved massive pork spending since taking over control in January. (I don't know about you, but I need that 2 percent in my paycheck to pay my bills.)

Don't say you weren't warned last year when you decided to punish Republicans and George W. Bush for the Iraq War mess by electing Democrats. This is what you get: More spending, higher taxes. See "Hillary McGovern" editorial in Investor's Business Daily.

"The war will cost future generations billions of dollars in taxes that we're shoving off on them and it is devouring money that could be used to expand their educational opportunities, expand their job training possibilities, attack our long-term energy problems and build stronger communities," Obey told the AP in justifying the tax hike.

Higher taxes: the answer for nothing.

Now, I'm not so sure. The American public may be smarter than we often give them credit for.