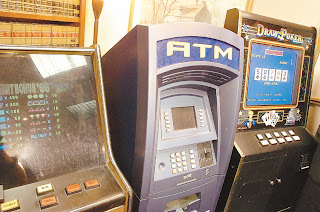 Democrats have never done well in county-wide races in Montgomery County. There are only two elected Democratic officials in the county, Commissioner Ruth Damsker (who serves on the three-member board because state laws requires that a minority party member sit on the board) and Joanne C. Olszewski, who serves a jury commissioner.

Their paths are intertwined. Up until two weeks ago, Olszewski was the chairwoman of the Damsker-Hoeffel ticket trying to win majority control of the commissioners' board.

That was until the Montgomery County District Attorney's Office, headed by Bruce L. Castor Jr. (who is one of the Republican candidates for commissioner) announced a big raid involving confiscation of illegal video poker machines. One of the businesses raided by the D.A. is owned by Joanne Olszewski and her husband.

The raid forced Olszewski to quit as chairwoman of the Damkser-Hoeffel team. This week comes news that Olszewski will face criminal charges. That has prompted Olszewski to resign her post as jury commissioner.

The timing of the raid (six weeks before the Nov. 6 election) has been a bone of contention between Democrats and Republicans in the county. Read about the dispute in today's edition of The Mercury.

With the election four weeks away, it's not looking good for the Damsker-Hoeffel team. A big part of their campaign was alleged corruption by the GOP-dominated commissioners' board. It's hard to call the kettle black when your campaign manager is about to be indicted.

Olszewski's resignation means Damsker is the only Democratic official left in the county. And Damsker's days may be numbered.

She's trailing in the race for re-election. The most likely scenario is a 1-2 finish by Bruce Castor and Joe Hoeffel, with incumbent Republican Commissioner Jim Matthews taking the third open seat. That keeps GOP control of the commissioners' board. That leaves Damsker on the outside looking in.

Ironically, it's her campaign manager and her running-mate that have the most to do with knocking Damsker out.

ANOTHER Democrat mired in a scandal? Color me shocked,....