GOP desperate to save Justice Saylor 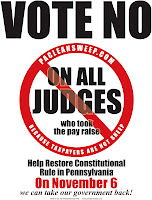 First it was Tom Ridge, then Pat Toomey, now it's Bill Scranton's turn to beg Republican voters not to oust Justice Thomas Saylor from the Pennsylvania Supreme Court.

Scranton, the former lieutenant governor and a gubernatorial candidate himself for about two weeks in 2006, is the latest high-profile Republican who has stepped forward to endorse Justice Saylor, facing a "yes" or "no" retention election on Nov. 6.

Saylor is the biggest target of reform groups who are asking Pennsylvania voters to reject 66 incumbent Pennsylvania judges.

Political observers say only a handful of judges might lose their retention vote, but knocking Saylor off the state's highest court would be a huge victory for the citizen activists who want to punish all elected officials for the infamous July 2005 pay raise.

The "Judicial Clean Sweep" campaign, headed by Russ Diamond, has the Republican and Democratic parties sweating as the election draws near.

Republicans have more to lose because any judicial seat left vacant by "No" votes on Nov. 6 would be subject to appointments by Democratic Gov. Ed Rendell. I'm sure there's a long list of Philadelphia lawyers who gave money to Rendell who would love to put on the black robes.

Don't believe for a second that judicial elections are not political. Each party is supporting its own slate of candidates.

Pennsylvania Republicans, already reeling from the loss of the state House of Representatives, four Congressional seats and a U.S. Senate seat, can't afford to lose Saylor's spot on the court.

As for Scranton's endorsement, you can read the full text at Saylor's Web site.

I'm not sure how much pull Bill Scranton still has with Pennsylvania voters, but I guess any endorsement at this point couldn't hurt.

The Tom Ridge plea to voters last month may have backfired. The former governor basically scolded Pennsylvania voters interested in reforming state government by telling them to stop living in the past. The Toomey endorsement may be the best one Saylor has received so far. Toomey has a strong following among the GOP's conservative base and he was an early critic of the pay raise.