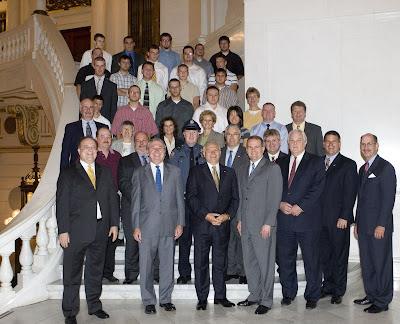 The House of Heroes project was an undertaking of students at the Western Center for Technical Studies vo-tech school in Montgomery County. The vo-tech school includes students from Spring-Ford, Pottsgrove and Upper Perkiomen high schools.

The students built a house for James Johnson, an injured Iraqi war veteran from Louisiana whose family lost their home in Hurricane Rita. The Johnsons' daughter Gracie is also battling leukemia.

The Mercury in Pottstown, Pa., chronicled the building of the House of Heroes from the start of the project last fall and traveled to Lake Charles with the Western Center for Technical Studies group to reconstruct the house on site for the Johnsons.

On Tuesday, the Pennsylvania Legislature honored the students and representatives of organizations involved in the project. The students were recognized on the House Floor and presented with House and Senate citations.

It was a well-deserved recognition, but I have just one question.

Why are the politicians standing in front in this official photo while the students are relegated to the back?

I know politicians never miss a photo opportunity, but shouldn't they be standing in the back, with the students front and center? Who did all the sweating to build the home and who did all the heavy lifting to get it to Louisiana? Not the politicians in Harrisburg.

For the record, the following politicians are pictured in front of the students and other volunteers.