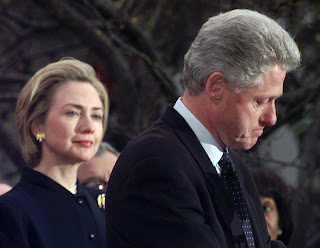 The story below moved today on The Associated Press wire service.

It's based on an interview Hillary Clinton gave to Essence magazine in which the junior senator from New York and the likely Democratic Party nominee for president gets all warm and gushy about her man.

Try not break out into hysterical laughter as you read it. I laughed so hard I nearly fell off my chair.

Has there ever been a more calculating individual seeking the presidency? There is not a sincere bone in Hillary Clinton's body.

Clinton discusses romance, choices in her marriage to the former president

WASHINGTON (AP) — Hillary Rodham Clinton says husband Bill often brings her romantic gifts: a giant wooden giraffe from an African trip, for example, and a Chanel watch that reminded him of teeth.

"Oh he's so romantic," the former first lady said in an interview for the November issue of Essence magazine. "He's always bringing me back things from his trips."

The watch had a bracelet made of white cubes. "I had dental surgery, and he said it reminded him of teeth," she said.

The New York senator, now a presidential candidate, said she is satisfied with the decisions she has made in her marriage.

"Now obviously we've had challenges as everybody in the world knows," she said. "But I never doubted that it was a marriage worth investing in even in the midst of those challenges, and I'm really happy that I made that decision."

In 1998, news unfolded about her husband's affair with Monica Lewinsky.

While sticking it out might not be for everyone, Mrs. Clinton said women should support each other in the choices they make in their marriages.

"I think it's so important for women to stand up for the right of women to make a decision that is best for them," she said.

To read more of "The Hillary Clinton Effect" go to www.essence.com