We'll cross that bridge when we come to it 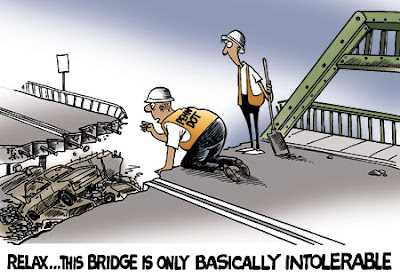 In the wake of the Minnesota bridge disaster, which killed a dozen people and injured hundreds, the Pennsylvania Department of Transportation finally released information on the condition of the state-owned bridges last month. The news was not good. Turns out that 6,000 of the state's 25,000 bridges are considered structurally deficient.

"Structurally deficient" is the same phrase used to describe the Minnesota bridge that collapsed into the Mississippi River.

Now the other shoe drops.

PennDOT officials said it would cost $11 billion to repair or replace the 6,000 state-owned bridges that are structurally deficient. There's no estimate on the cost of fixing the 2,000 locally owned bridges.

Makes you wonder if Gov. Ed Rendell will change his tune about funneling more than $1 billion a year to subsidize the corrupt and inefficient mass transit systems in the state while allowing the state's bridges to collapse.

I doubt it. Like I said before (How Safe Are Pennsylvania Bridges?), bridges don't vote. But tens of thousands of unionized transit workers vote and usually vote for big spending liberal Democrats like Ed Rendell. So if you want the state to start dealing with the serious problem of deteriorating highways and bridges, you better get on your legislator's case.

The list of locally bridges in need of repairs is available at the department's Web site, http://www.dot.state.pa.us/

(Cartoon by Randy Bish of the Pittsburgh Tribune-Review)