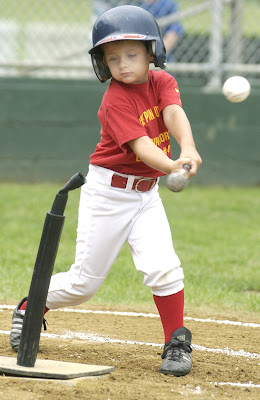 The state's bridges are crumbling, nearly a million Pennsylvanians don't have health insurance, electricity rates are about to skyrocket and property taxes are chocking the state's growing elderly population.

So what is the nation's most expensive state legislature dealing with today? Which crisis are lawmakers tackling?

Metal bats. Specifically, whether the state should forbid kids from using metal bats in baseball and softball games.

A bill introduced by Rep. Michael B. Carroll, D-Luzerne, would impose fines for youth baseball teams that do not start using wooden bats for their games. Players would be fined $25 and organizers $50 for using non-wood bats, according to the bill.

You wonder why Pennsylvania voters got rid of 1 in 5 state lawmakers in the 2006 elections or why the Legislature has a 30 percent approval rate?

It's not like there aren't enough real problems Pennsylvania lawmakers can address.

Rep. Carroll is worried that players who use metal bats, that's pretty much everybody in the past 25 years, are hitting baseballs too hard. Those line drivers could injure players, he argues.

Little League Baseball Inc. President Stephen D. Keener testified before the House Children and Youth Committee today. Keener said metal bats are not dangerous and banning them would hurt the sport. Keener said he's never heard of once case in the past 25 years where a child was injured as a result of using aluminum bats.

Is there a bigger waste of time and taxpayer dollars than this?

Somebody in Carroll's home district should seriously consider running against this guy next year. It's obvious he has too much time on his hands or he's taken a line drive to the head.

Has Carroll ever watched a youth baseball or softball game? The kids are lucky to make contact with the ball and it general doesn't leave the infield. Unless Little Leaguers are on steroids, there's not reason to ban metal bats.

Keener isn't the only person who thinks the proposed ban is batty.

Check out the Don't Take My Bat Away coalition's Web site: http://www.dtmba.com/

Also, a group of Olympic gold-medalists and current members of Team USA — the Team USA – the women's Olympic softball team – sent a letter to the Legislature opposing the proposed ban on aluminum bats.

The letter (printed below) was signed by 12 gold medal winners from the 1996, 2000 and 2004 teams, including: Michele Smith, Julie Smith, Laura Berg, Natasha Watley, Stacey Nuveman, Cat Osterman, Jessica Mendoza, Lovieanne Jung, Jenny Topping, Lisa Fernandez, Jennie Finch, and Amanda Freed, and three members of the 2008 Team USA – Andrea Duran, Alicia Hollowell, and Lauren Lappin -- which will go for gold next summer at the Olympics in Beijing. Sarah Pauly, an all-star softball player and current college assistant coach, (but not an Olympic athlete), also signed the letter.

As Olympic champions, gold medalists, current and former members of Team USA, and supporters of softball, we are writing to express our strong opposition to Pennsylvania House Bill 1482, introduced by Representative Mike Carroll, which would prohibit non-wood bats in amateur softball and baseball games in the State of Pennsylvania.

Despite good intentions, this bill won't improve safety one bit, but it will damage our game. Girls softball is one of America’s greatest success stories, not only for its contribution to fitness and athleticism, but for the values it has taught generations of young women: discipline, teamwork, competitiveness, and sportsmanship.

Softball is one of the safest sports, period. In the National Collegiate Athletics Association, women's softball has the lowest rate of game injuries among 15 of the most-played sports at the college level, according to the Journal of Athletic Training. Since 2000, the Amateur Softball Association has used bat performance standards to regulate the batted ball speeds (the speed of the ball coming off of a bat) of all its approved bats. These rules and standards have protected player safety.

Softball is also one of the most popular sports for girls to play, with over 75,000 girls playing fast pitch in Pennsylvania alone. This caps a long period of growth in the sport that has introduced many girls to competitive high school athletics for the first time in their lives. There is large body of evidence that participation in high school sports is a positive factor for physical fitness, academic achievement and developing the skills needed for success in life.

We've achieved this success not from government, but from the partnership of dedicated league officials, coaches, players and parents…and with respect, as the athletes who actually play the sport, we believe we have a greater understanding of its dynamics than do the politicians who have most likely never played the sport. We have dedicated ourselves to keeping our game great while at the same time protecting the health and safety of the players.

Amateur Softball is not broken and does not need to be fixed. We hope you will agree.