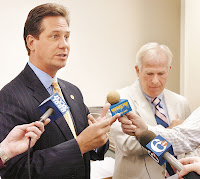 An internal poll done for the Republican candidates in the much-watched race for Montgomery County Commissioner shows the GOP slate of Bruce Castor and Jim Matthews should be able to keep Republican control of this crucial Southeastern Pennsylvania county for four more years.

Castor, the current Montgomery County District Attorney, is on top with 55 percent support, according to the poll. Democrat Joe Hoeffel is second with 51 percent. Jim Matthews comes in third with 40 percent. Incumbent Democrat Ruth Damsker brings up the rear with 34 percent.

If the trend holds until Election Day, Castor and Matthews would keep a Republican majority on the board, with Hoeffel as the minority commissioner.

Castor is the best known political figure in Montgomery County and is well respected as a tough prosecutor. He will be the top vote-getter on Nov. 6. Hoefell, a former county commissioner and former area Congressman, has lots of name recognition, too, because he's always running for something. His ultra liberal politics will attract support from the eastern half of the county.

With the Montgomery County commissioners' race looking safe for the GOP, expect Rendell to concentrate on Chester County and Bucks County in the final weeks of the campaign.

Looking over the latest poll numbers, Matthews, who ran for lieutenant governor of Pennsylvania on the Lynn Swann ticket in 2006, has gained 6 points on Damsker in the past month. The last poll showed Matthews and Damsker dead even.

Damkser has lost ground with some wacky behavior and oddball comments. She brought up the "R" word (reassessment) in a county that is doing very well financially. Property taxes are a big issue in Montgomery County and a countywide reassessment would be a de facto tax increase for many residents.

Damsker also has had several widely publicized spats with Commissioners' Chairman Tom Ellis and even broke into tears are a recent commissioners' meeting. There's no crying in politics!

The current GOP-led board managed to cut property taxes in 2007 and Castor/Matthews have promised another property tax cut in 2008 if they're elected.

The poll by Neil Newhouse also asked potential voters to rank the candidates via favorable and unfavorable traits.

Here are the results:

And for laughs, the poll also asked views on other politicians:

(Note the difference between Giuliani's and Clinton's numbers in Montgomery County. If Republicans have any hope of winning Pennsylvania in 2008, Giuliani has to be the party nominee.)

What's the old saying about counting chickens? The poll is obviously skewed to the GOP. How else do you explain a 34% approval rating for Bush?
All Ruth Damsker has done is point out the ethically shortcomings of Jim Matthews, Tom Ellis and Bruce Castor and all the sweetheart deals that that come from a sense of entitlement.
The only tears to be shed in this campaign will be those at the GOP wake on November 6.