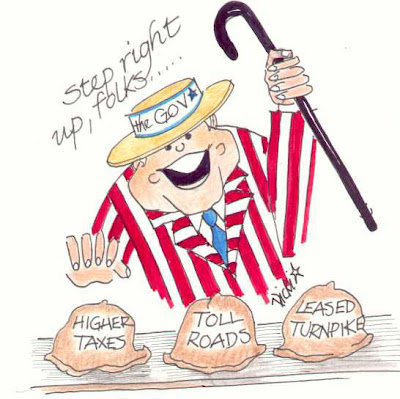 After finishing the 2006-07 fiscal year with a $650 million surplus, the commonwealth of Pennsylvania continues to take in more than it needs to operate.

Politicians call it a surplus or a rainy day fund or a cushion, but what we're dealing with here is over-taxation. Government is taking in too much money, more money than it projected it would need to stay in operation and more money than its number-crunchers anticipated.

The August numbers released by the Pennsylvania Department of Revenue show that Pennsylvania collected $1.7 billion for its General Fund, which was $6.5 million more than anticipated.

The state took in $1.8 billion in July, the first month of the new fiscal year. Fiscal year-to-date General Fund collections total $3.5 billion, which is $17.4 million above estimate.

Here's a suggestion. Give the money back. Today. Not a year from now. Not when it has accumulated to $500 million or more. Now.

You remember what happened to the $650 million the state had left over after the last fiscal year, don't you? The politicians spent it. It's gone. As in we'll never see a dime of it despite umpteenth promises by Gov. Ed Rendell and the Legislature that they're going to cut property taxes.

Here's some other highlights from the Department of Revenue's monthly report:

Realty transfer tax revenue was $53.1 million for August, bringing the total to $107 million for the year, which is $13.2 million more than anticipated.

Other General Fund revenue including the cigarette, malt beverage and liquor tax totaled $119.6 million for the month, $6.9 million below estimate, bringing the year-to-date total to $243.8 million, which is $2.2 million above estimate.

The Gaming Fund received $88.6 million in unrestricted revenues for August. Fiscal year-to-date collections for the fund total $222.9 million. Gaming Fund receipts include taxes, fees and interest. Of the total for the month, $37.9 million was collected in state taxes for property tax relief, bringing the year-to-date total to $71.9 million.

I'm not sure what all the gaming mumbo-jumbo means. All I know is that Ed Rendell signed the casino gambling bill into law in July 2005. Here we are 26 months later and not a penny from slots revenue has returned to Pennsylvania residents in the form of promised property tax relief.

Government should not be in the business of making a profit on the backs of taxpayers. It's time for Pennsylvania residents to stage a modern day Boston Tea Party. How about a Philadelphia Tea Party? We can start by tossing Ed Rendell into the Delaware River.

I ran across this post on my automated Google news search for stories about Pennsylvania taxation. You're bookmarked.

On the topic of our taxes here, you are so right. My philosophy is that our mostly-corrupt state should not be allowed to raise one more cent in taxes until they can prove to the tax payers that they are the most efficient state with our money in the country.

On the subject of property taxes and Gov. Rendell's attempts to "reform" them, I've written a bit on my blog about why we should consider leaving them alone. I hope you have a chance to check it out.