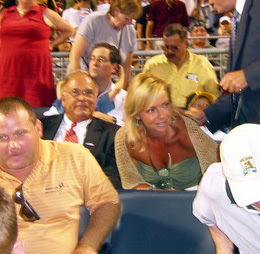 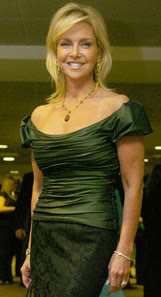 Pennsylvania Gov. Ed Rendell, a stunning blonde lobbyist, private investigators and $75 million in tax incentives for Hollywood millionaires. What do you get when you add all this up?

How about another scandal involving Pennsylvania's governor, who is already smarting from his connections with fugitive Norman Hsu, a big-time donor to the Hillary Clinton campaign.

Rendell was forced to give away $40,000 of Hsu's tainted money to charity this week.

Rendell was also implicated in another financial scandal involving Hillary Clinton and a guy named Peter Paul. That story was reported Friday in The Wall Street Journal.

But the latest scandal has legs. And those legs belong to Leslie M. McCombs, a statuesque former beauty contestant and television anchorwoman, who is now an actress and lobbyist.

Rendell insisted in putting $75 million in the new state budget this year to entice Hollywood film makers to come to Pennsylvania. McCombs has been seen (and photographed) in the company of Gov. Rendell and pushed for the $75 million in tax breaks for Hollywood millionaires.

But she apparently failed to comply with Pennsylvania's lobbyist laws, which are already the weakest in the nation, according to news reports. A Republican state senator, Jeff Piccola, wants to investigate McCombs' role in influencing the governor. That's where the private investigators come in. Piccola wants to spend up to $10,000 in taxpayer dollars to find out exactly how much influence Ms. McCombs has on the governor.

McCombs is described as a social friend of Rendell's in news accounts. She's been spotted at dinner and baseball games with the governor. The photo above would be Ms. McCombs next to the governor in a box seat at a Pittsburgh Pirates game. She also donated $4,000 toward Rendell's re-election bid in 2006, according to campaign records.

The story was first reported by the online news service Capitolwire.com, but since you have to be a member to read it, we had to settle for the mainstream media picking up on it.

There's a story today in the Pittsburgh Post-Gazette under the headline "Rendell chides private eye use in lobby probe."

The incident was also picked up by John Baer, columnist for the Philadelphia Daily News, who has a piece today called, "Guv, the blonde & lobbying law."

The Daily News' blog, Attytood also had some fun at the governor's expense.

And something called The Daily Examiner had this post: "Hot Blondes Make Even the Lamest Political Controversies More Compelling."

Also check out this column by Eric Heyl of The Pittsburgh Tribune-Review, "Gloomy governor ponders his woes."

So let's just pile on Rendell.

Legs? Who was looking at her legs?

But seriously, this is what America wanted last November? A party that would end the Iraq War but line its own pockets at a rate not seen since the days on Tammany Hall???

I hope for the sake of Keystone Staters that Rendell doesn't have visons of replacing Gov. with Sen. in front of his name when this second term mercifully ends, but given that Pa. has two Congressmen on the corrupt list already, that wouldn't be a stretch at all, huh?

I just hope for the sake of Keystone Staters that Rendell doesn't have visions of the title Sen. replacing Gov. in front of his name when his second term mercifully ends. Of course, with two Pa. Congressmen already on the corrupt list, that wouldn't really be a stretch, would it?