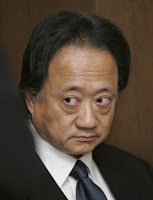 The Washington Post is reporting today that Democratic fundraiser Norman Hsu, whom Ed Rendell described as a "friend" and a man of "good character," is facing a federal indictment as the alleged mastermind of a $60 million fraud scheme tied to campaign donations to prominent Democrats.

Hsu, a big-time contributor to the Hillary Clinton campaign, is in a Colorado jail awaiting extradition to California, to face 15-year-old criminal charges involving another fraud case.

Rendell had this to say about Hsu as recently as Sept. 1: "He is a man who has proved himself to be of good character," Rendell told The Philadelphia Inquirer in a story titled, "Rendell: Don't Rush to Judge Fund-raiser."

The newspaper reported Rendell received nearly $40,000 from Hsu during 2005 and 2006, according to state campaign-finance records. Pennsylvania does not limit the size of contributions.

After initially refusing to give up the tainted money, Rendell gave in to mounting pressure as the Hsu scandal grew and donated the $40,000 to nine charities in Pennsylvania.

Hsu's ongoing legal troubles and his shady dealings involving Clinton, Rendell and other Democrats, is the tip of the iceberg. Money has corrupted the American political system and nobody has taken advantage of loopholes in campaign finance laws more than the Democratic Party.

We face the prospect of the likely Democratic presidential nominee, Hillary Clinton, dividing her time between campaign stops and testifying in the various fraud trials Hsu is facing in 2008.

What about the CLINTON's LEGAL ISSUES?

And we care about Larry Craigs bathroom HABITS? Will that effect the COUNTRY or make good REALITY TV NEWS?

This is SAD! The Clintons will continue a web of deception taking office and it will be a detriment to this country.

WHY DOES THE MEDIA NOT REPORT WHAT HAS BEEN MADE PUBLIC RECORD ON THE CLINTONS and their seemingly continuous questionanable ethical behavior?

I mean REALLY if we can to talk about "sexual issues" Hillary is dealing with the Postor child in HER OWN HOUSE and can not handle it, yet she EXPECTS to RUN the WHITEHOUSE??

I recommend The Hillary Project for the latest scandals involving the next Democratic nominee for president. The site address is http://www.hillaryproject.com/

IF THE HSU FITS…

Norristown, PA (September 18, 2007) – Ruth Damsker and Joe Hoeffel, Democratic candidates for Montgomery County Commissioner today called upon Republican county commissioner candidate Jim Matthews to return all campaign money raised from and by Robert Asher, a member of the Pennsylvania Republican Committee and a long-time behind-the-scenes power in Montgomery County politics.
Asher was convicted in 1986 of bribery-related charges as part of a scheme to award a no-bid contract to a company in exchange for promises of $300,000 in payoffs and political contributions. Asher spent a year in prison for the conviction.
Hoeffel pointed to the recent spate of news reports about Norman Hsu, who has been a fundraiser for Democratic causes and candidates despite being a fugitive from a 15-year-old conviction for fraud.
“What is good for Hillary Clinton and Ed Rendell should be good for Jim Matthews,” Hoeffel said, referring to the fact that Sen. Clinton and Gov. Rendell have returned money raised for them by Hsu, even though they were unaware of Hsu’s background.
“Mr. Matthews is very well aware of Mr. Asher’s background, especially since his running mate Bruce Castor has been so critical of any politician who has had Asher contribute or raise money for them,” Hoeffel said.
Recent press reports have said that Asher has been asked to raise substantial amounts of money for Matthews, which would in turn benefit the Matthews-Castor campaign, because of the strong challenge the GOP is receiving this year from Damsker and Hoeffel. In fact, Asher this week hosted a large, high-priced fundraiser for Matthews at the Union League in Philadelphia.
-- more --
Damsker-Hoeffel – add one

“Mr. Asher not only committed a serious crime, but one that corrupted the political process in Pennsylvania,” Damsker said. “Mr. Matthews should return every cent that Mr. Asher or is political action committees have contributed or raised for him.”
Hoeffel also demanded to know what Castor thought about Asher raising money for Matthews, which would directly and positively affect the Matthews-Castor campaign.
“After all, in 2004 when Asher backed Tom Corbett, Castor’s opponent in the Republican primary for state attorney general, Castor slammed Corbett for ‘being bankrolled by a convicted felon who served time for political corruption’,” Hoeffel said. In other published reports, Castor was quoted as calling Asher a “madman” and said, “that lunatic is in charge of the asylum.”
“It looks as if Mr. Asher is now in charge of the Castor-Matthews asylum,” Damsker said.
Hoeffel also pointed to a report published in the December 19, 2003 edition of the Pottstown Mercury that quoted Castor on the subject of Asher. Castor said: “I have never been in Bob Asher’s back pocket, and because I have always remained independent and beholden to no one, Bob Asher is determined to beat me. No law enforcement officer, particularly the state attorney general, should be under the control of one man, especially a man who spent a year in prison on a conviction in the early 1990s in connection with the award of a no-bid promise of a contribution to the state Republican committee.”
“Based upon Mr. Castor’s own words, and the national political news of the past few weeks, and in the interest of personal integrity, we urge Mr. Matthews to return all the money he has received from or because of Mr. Asher,” Hoeffel said. “And, we urge Mr. Castor to be as discriminating in his advice to Mr. Matthews as he was to Mr. Corbett in 2004.”