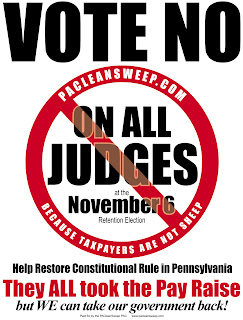 Having trouble deciding which Pennsylvania judicial candidates to retain in the Nov. 6 election?

The folks at PACleanSweep want to make it easier for you. Just vote 'No.' That's right. Vote 'No' for everyone on the ballot.

The non-partisan watchdog group that helped launch the citizen revolt against politicians after the July 2005 pay raise is targeting state judges for defeat this year.

PACleanSweep held a news conference in the Capitol Rotunda in Harrisburg Thursday morning to launch its new campaign to defeat all 67 judicial candidates up for retention in November.

In addition to its "Just Say No" stance on judges, the group unveiled a new Judicial CleanSweep section of its Web site at www.pacleansweep.com

PACleanSweep has collected a list of all judges up for retention on its Web site with a link to county-by-county lists for use by voters across Pennsylvania.

The group is recruiting volunteers to work the polls on Election Day to help educate voters about the retentions and has released the first of its Top Ten Reasons to Vote NO on Nov. 6, entitled "The Judicial Swindle."

"The twisted judicial pay raise decision by the Supreme Court and the fact that every single judge in the state has benefited from it is the first issue every Pennsylvanian needs to consider," said Russ Diamond, PACleanSweep chairman. "We'll be offering more valid reasons to vote 'no' over the next seven weeks, but this is one that grates on citizens more than most."

Of the 67 judges seeking retention, 25 would not be able to serve out the entire term they seek due to Pennsylvania's mandatory judicial retirement age of 70, Diamond said. This number includes five of the seven statewide appellate court retention candidates. After a retirement, Gov. Ed Rendell appoints a successor until a new contested election can be held to fill that particular seat.

PACleanSweep is basing its retention campaign objectives on an online poll made available over the last month to Web site visitors and e-mail subscribers, Diamond said. The results of the poll are available at www.pacleansweep.com

"Reform-minded people have spoken and this organization is dedicated to doing the people's work," added Diamond. "Judges may decide the law, but the people decide who the judges are."

All Pennsylvanians - regardless of party affiliation - will have an opportunity to cast a vote on seven statewide judges from the Supreme, Superior and Commonwealth courts on Nov. 6, Diamond said.

Another 53 Common Pleas Court judges will also be on the ballot for retention in various counties scattered across the state. All these judges are seeking new 10-year terms.

What YOU Need to Do on November 6th

Top Ten Reasons to Vote 'No'